Imagine says it can deliver high-speed broadband to 800,000 rural homes 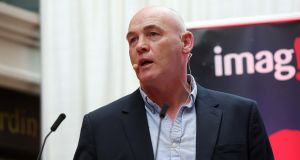 ‘Within six months we have made reliable high-speed broadband a reality for over 800,000 premises,’ says Imagine’s chief executive, Sean Bolger.

Wireless broadband operator Imagine claims it can now deliver high-speed broadband to 800,000 rural homes and businesses, many of which are earmarked for coverage under the Government’s National Broadband Plan (NBP).

The company said it had completed the first phase of a €300 million investment to roll out its new 5G technology, which it says is capable of delivering broadband speeds of up to 150 megabits per second (mbps). The service will be offered to users for €60 per month with a €150 set-up fee.

Unlike fibre operators, Imagine uses a fixed wireless technology to transmit the broadband signal to households through a network of masts, to be located on 325 sites across the country.

The company said high-speed, high-capacity and low-latency 5G technology had removed the barriers to the “rapid rollout” of broadband infrastructure despite claims it will not get to every household.

“Within six months we have made reliable high-speed broadband a reality for over 800,000 premises,” Imagine chief executive Sean Bolger said.

“ This includes 234,000 homes and businesses which faced a wait of five to seven years to be connected and where Imagine is now the only provider in the area,” he said.

“This is a critically important investment in infrastructure in rural Ireland which will quickly deliver an essential service which otherwise would have taken years to provide,” Mr Bolger said.

“As an alternative, and new, this infrastructure will provide effective competition in the wider high-speed broadband market which will stimulate further commercial investment and greater choice for consumers,” he added.

The Government is expected to sign the NBP contract with preferred bidder Granahan McCourt next month amid an outcry over the escalating cost of the scheme, which is now put at close to €3 billion.

The plan is expected to deliver high-speed broadband to more than 540,000 homes and businesses in the most remote parts, where commercial players say it is uneconomical to operate.

The current EU state aid rules restrict governments from funding services where they are offered commercially by private operators. It is not clear if Imagine’s incursion into the NBP intervention area will affect the plan.

US and European stocks slip amid Covid-19 fears 11:15
Apple planning updates to its AirPods earbuds next year 11:01
UK consumer confidence falls after five months of gains 10:52
Sustainable investment: How your pension can help tackle climate change 05:30
‘We lost money on our planned wedding in Spain. Covid saw to that’ 05:30

1 Hurrah for the companies giving staff more time off
2 Apple planning updates to its AirPods earbuds next year
3 RTÉ to seek 70 voluntary redundancies as ‘large costs’ beckon in 2021
4 Start-up Loanitt raises €570,000 as it looks to double headcount
5 Some Irish money market funds came close to danger in March
Real news has value SUBSCRIBE