Web Log: Clickbait in form of political outrage articles likely to be viewed as ‘fake news’ 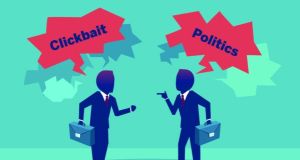 Clickbait in the form of political outrage articles might seem like a shrewd tactic on the part of news websites looking for a quick and steady stream of emotionally swayed readers but new research shows this kind of content not only decreases engagement, it is also more likely to prompt perceptions of “fake news”.

The study from the Centre for Media Engagement at the University of Texas at Austin examined audience engagement with outrage news or content containing “insults and name-calling, verbal sparring, exaggeration, extreme partisanship, and obscenity”. It was found that people were not only more likely to rate an outrage article as fake news but that they were also more likely to find purveyors of these articles less trustworthy and less credible.

“Some newsrooms lean toward outrage content due to the belief that negative news will draw audience attention. We find evidence that, at best, it does not increase intended engagement, and, at worst, backfires,” said study authors Ashley Muddiman and Joshua Scacco.

Interestingly, though, readers were a little more likely to remember facts from articles with outrage headlines than those with straightforward headlines. “Even though outrage leads people to think more negatively about the news, it may simultaneously encourage them to pay more attention to the information,” the study concluded. Swings and roundabouts?