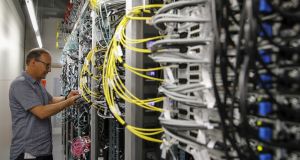 Business lobby group Ibec has urged the Government to address concerns over possible health risks associated with 5G mobile technology after motions were passed by four local councils recently opposing the rollout of the new technology.

Councillors in Wicklow last month voted in favour of a notice against the rollout of 5G networks, following similar moves by local authorities in Leitrim, Sligo and Clare.

Businesses are worried that an “information vacuum” exists with county councillors being swayed by those who believe the technology poses significant risks to the public.

Ibec chief executive Danny McCoy wrote to Minister for Communications Richard Bruton and Minister for Planning Eoghan Murphy this week to outline the serious concerns of its members on the issue.

In his letter, seen by The Irish Times, Mr McCoy warned that “populist motions” could impede the rollout of the technology and disadvantage the communities opposing it.

He said 5G was important for Irish business because it has the “potential to very significantly transform healthcare, manufacturing and transport”.

Vodafone was the first Irish mobile operator to go live with a commercial 5G service in August with Eir following last month. Three is expected to announce a similar service shortly.

The technology is the next generation of mobile connectivity, succeeding the current 4G and older 3G systems. It delivers faster speeds of more than 1,000 megabits per second, as well as increased security, reliability and lower levels of latency.

While governments and businesses around the world have been pushing hard for 5G to become a reality after years of hype, concerns over health risks associated with mobile technology have increased. This is in part because 5G uses higher-frequency waves that require more transmitter masts as they travel shorter distances.

Scientific experts have to date largely played down concerns about the technology, with most stating that while there is an increased exposure to radio waves, it remains on the low side.

The UK’s minister for digital and broadband, Matt Warman, recently wrote to planning authorities warning them not to oppose 5G rollout without “legitimate grounds and evidence”. He cited research from the World Health Organisation, which he said shows the technology “poses the same risk as talcum powder and pickled vegetables”.

In his letter, Mr McCoy said county councils that oppose 5G “are sending out a signal that they are hostile to the digital economy and are blocking the job potential it offers”.

Noting that the British government has prioritised rollout of the technology as a means to staying competitive following Brexit, Mr McCoy said it was “particularly unfortunate” that some of the counties most exposed to the harmful effects of the UK’s exit from the European Union had decided to attempt to hinder the rollout of 5G.

“It is important that the benefit of 5G and the conclusions of the international scientific community regarding the public-health dimension are communicated to the elected members of all county councils and public concerns addressed,” he said.

Mr McCoy also urged the Ministers to suggest briefings by the Environmental Protection Authority on the scientific evidence in favour of 5G, and recommended that an expert panel be convened under the EPA to continually monitor research into exposure to the technology.

1 Major credit union plans to limit savings accounts to €40,000
2 Brother is dragging his heels as executor of uncle’s will - is there anything I can do?
3 Passengers face queuing in car parks at Dublin Airport
4 Tesla’s Elon Musk calls for breakup of Amazon in tweet
5 Woodchester founder Craig McKinney dies
Real news has value SUBSCRIBE