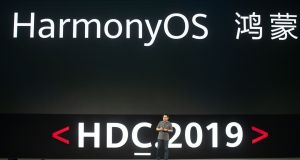 Huawei Technologies unveiled on Friday its proprietary operating system (OS) for use in smartphones and other devices, as US trade curbs imposed in May threaten to cut the Chinese firm’s access to crucial technologies such as Android.

“You can develop your apps once, then flexibly deploy them across a range of different devices,” he told a developers’ conference held in Dongguan in southern China, where Huawei has built a lavish new campus modelled after European towns.

Harmony, called Hongmeng in Chinese, is ready for use in smartphones but Huawei prefers to stick to Android for now to support its app developers, Mr Yu said, adding the Honor smart screen product it plans to unveil on Saturday will be the first product using the Harmony OS.

He said it would be difficult for Huawei to meet its previous goal of becoming the world’s biggest smartphone maker by shipments this year due to the US curbs.

The company would have been able to ship 300 million smartphones this year without such restrictions, Mr Yu said.