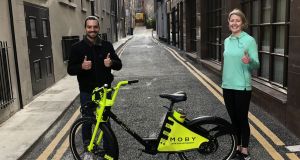 On your bike: Healthcare workers will get on the road thanks to free use of Moby electric bikes

There are plenty of businesses having to adapt amid the coronavirus outbreak. That includes companies that haven’t even started offering their products and services yet.

Take Moby for example. The company was due to launch its fleet of electric bikes for hire across Dublin at the start of April. But with Covid-19 restrictions coming into force the company has opted to put off the launch until a later time.

In the meantime, rather than just let its “pedelecs” (electrically assisted pedal cycles) sit idle, it is putting them to good use by lending them to healthcare workers free of charge.

The move started after Dr Anna O’Leary took to Twitter last week asking if anyone could lend her an electric bike or would rent her one. Moby offered one of theirs, after which a flood of further requests came in from other healthcare staff.

Not only has the company now loaned out a number of bikes, founder and chief executive Thomas O’Connell has launched a GoFundMe campaign to try to secure more pedelecs that it can provide for free to frontline workers.

Many healthcare staff in the capital use public transport for their commute, but with such services being reduced, a need to work anti-social hours and a wish to isolate while away from their healthcare setting, many find themselves struggling.

Moby is trying to do its bit to make things easier on that front. “The cost of renting an ebike in Dublin today is €350 to €400 per month. We have worked to get the cost down to €150 and are appealing to the public to help fund this cost so that the bikes can be free,” O’Connell said. “We are also appealing to anyone with an electric bike to lend that bike to us and we will take care of the pick-up, maintenance, sanitisation and delivery to a healthcare worker that wants one as well as cover the cost of insurance and we will guarantee the safe return of the bike.”

The public has responded well to the initiative with the fundraising campaign raising €9,600, more than its initial target.

The more money the start-up raises, the more free ebikes it promises to make available for healthcare workers.