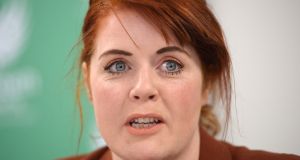 The Green Party’s finance spokeswoman has said the Government should “look at the usefulness” of appealing an adverse finding in the €13 billion Apple tax case, if one is delivered this week.

A verdict on an appeal by the Republic and Apple in relation to the European Commission’s finding that Apple had a favourable tax deal with the State, and that it consequently owes €13 billion in back taxes, is due to be delivered on Wednesday.

It is widely expected that the verdict from the General Court of the European Union will be appealed again, no matter the outcome, by one of the losing parties – including the State, which has said no special deal existed and that the €13 billion is not owed to the Irish exchequer.

However, Green Party TD Neasa Hourigan has said the State should “look at what the ramifications of appealing it would be, and what kind of a message, what signal that’s sending, to both the market and in the context of the EU”.

The verdict will come at a sensitive time for the Republic, which has been forced to fight a rearguard action against European efforts to impose different types of sales and digital taxes in recent years. The State has instead committed to a multilateral process being run by the OECD, which aims to target international tax planning on a global scale. This is known as the base erosion and profit shifting (BEPS) programme.

“We’ve already signalled and stated we are supportive of the BEPS process and the OECD process around tax justice, and that’s the direction we should all be travelling in and I think that’s the context you’d have to look at yet another appeal in. I do think we seriously have to have a look at what the usefulness of another appeal would be,” Ms Hourigan said.

Ms Hourigan is still the Green Party finance spokeswoman as the party maintains such roles even when it is in Government. However, party leader Eamon Ryan has indicated he will reassign the portfolios soon, and it is expected that she will be moved to another position. Ms Hourigan was on the Green Party negotiating team for the programme for Government, but the Dublin Central TD campaigned against endorsing the programme, arguing that it did not do enough for housing and equality.

“The Green Party has had a long history of supporting tax justice and we would see that ensuring large corporations pay their fair share is actually part of climate justice too,” she said. “It’s something that is quite important to us because we see that larger picture.”

Her comments, while not made on behalf of the party, could signal a potential stumbling block for a Government decision to appeal the court’s finding, if an adverse judgment is made from the State’s perspective. While she is not seen as close to the party’s current leadership, a significant minority of the party’s membership did not vote in favour of the programme for Government. The Green Party has called in the past for concerted international responses on tax planning.