Social network due to report after markets close on Wednesday 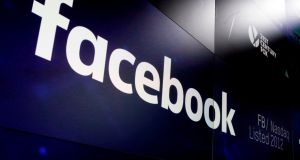 The impact of the EU’s General Data Protection Regulation on Facebook’s business is likely to be a key focus. Photograph: AP

In a maelstrom of controversy over election meddling, inappropriate content and privacy violations, Facebook chief executive Mark Zuckerberg says he is remaking the social network as a place that prioritises “meaningful connections” between friends and family over the needs of businesses and publishers.

First-quarter results after the end of the trading day on Wednesday will reveal more about how the rethink might affect Facebook’s profitability. Here are four things to watch.

On the last earnings call in January, analysts showed they were already worried about a decline in the amount of time Facebook’s users were spending on the platform. The number of hours spent on the social network in the fourth quarter of 2017 fell by about 50m a day from the previous three months, about 5 per cent. In the US and Canada, home to the most valuable users to advertisers, the number logging on every day fell by 700,000 to 184 million.

Facebook said the decline was due to a change to the algorithm that tried to limit the spread of viral videos and promised to continue to shake up the news feed to prioritise content from family and friends. Two weeks before the end of the first quarter, it was revealed user data had been leaked to the research company Cambridge Analytica, prompting a #deleteFacebook campaign that could have hit these figures further.

Are advertisers spending more or less?

If people are spending less time scrolling through their news feed, that would mean fewer opportunities to show them ads, and the impact on revenue will be of keen interest to investors. A lower supply of ad spots could actually increase the price, in which case Facebook might not suffer financially.

Since the Cambridge Analytica revelations, two weeks before the end of the quarter, the vast majority of marketers appear to have remained loyal to Facebook, because the platform is so effective at targeting their audiences. Mozilla, the Firefox browser maker, and Germany’s Commerzbank did pull their ads, while Sonos, the speaker maker, said it would not advertise on the platform for a week. Elon Musk deleted the Facebook pages of his companies - Tesla and SpaceX - but they did not buy ads anyway.

If advertisers did stall any spending, it might be reflected in revenue guidance for the second quarter and beyond.

Facebook does not know if it will be more heavily regulated in the wake of the Cambridge Analytica scandal. Political interest in privacy issues dragged Mr Zuckerberg to Capitol Hill for two days of testimony this month, but without a sense of what new rules might ensue, it will be hard to guide investors on costs.

It can talk about the EU’s General Data Protection Regulation which comes into effect next month. Facebook has said it will apply the spirit of the law to all its users, giving them new power to limit and retrieve the data they hand over to the company. The company has transferred its non-European users away from its international headquarters in Dublin back to its home base in California, but has given no guidance on how much restricting the data it collects in Europe and elsewhere could cost it.

GDPR could also cause a slowdown in digital ad spending in Europe if targeting becomes less effective. “Although Facebook may very well grow its share, growth will probably slow along with the market there,” wrote Brian Wieser, an analyst at Pivotal Research.

As well as potential costs from US Federal Trade Commission and European regulators’ investigations into the Cambridge Analytica scandal, and any impact on revenues, Facebook may have to spend more to recover from its controversies.

The cost of hiring extra lobbyists and paying for crisis PR is unlikely to make much of a dent in its financial position. But last year, as it dealt with the discovery of Russian election meddling on the platform, it warned investors that profits would be hit by its plan to double the number of content moderators to 20,000 by the end of 2018. Shareholders will want to know if there are any more costs related to the changes it is making to its policies and to enforcement of its rules. – Copyright The Financial Times Limited 2018

1 Who are Ireland’s 17 billionaires?
2 Ireland has fifth-largest number of billionaires per capita in the world, says Oxfam
3 Irish people like nothing more than being bribed with their own money
4 Cubic Telecom raises more than €11 million in funding
5 Boeing’s 737 Max will fly again in 2020, Avolon predicts
Real news has value SUBSCRIBE