Google wins in ‘right to be forgotten’ fight with France 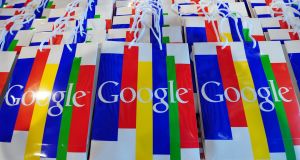 The court ruled that EU law did not automatically apply outside the bloc. Photograph: Johannes Eisele/AFP/Getty

Google will not have to impose a global block on searches for information about EU citizens who invoke the “right to be forgotten”, after a court ruling that amounts to a victory for the tech giant and internet freedom activists.

The European Court of Justice on Tuesday ruled that Google’s delisting of search results that concern EU citizens should apply only in the bloc’s 28 member states.

The case is the first major ruling clarifying the geographical scope of the right to be forgotten, which since 2014 has allowed EU citizens to request delistings of information they deem “inaccurate, inadequate, irrelevant or excessive”.

The court said EU law did not automatically apply outside the bloc. It said Google and other search engines should take measure to “discourage” internet users outside the EU from carrying out searches that could lead to links delisted in the bloc. Judges said member states would have to decide if Google was taking adequate measures in this regard.

The case arose after Google challenged a €100,000 fine from France’s data protection regulator, which ordered the company to delist material across its global domains, citing the right to be forgotten principle.

Google and civil liberties organisations have argued that global delisting impinges on free speech and would in effect be a way to enforce EU privacy standards in countries without similar laws.

Responding to the judgment, Peter Fleischer, senior privacy counsel at Google, said: “It is good to see that the court agreed with our arguments, and we are grateful to the independent human rights organisations, media associations and many others around the world who also presented their views.”

Thomas Hughes, executive director of article 19, an organisation that led a coalition of free speech groups in the case, called the ruling a “victory for global freedom of expression”.

“Courts or data regulators in the UK, France or Germany should not be able to determine the search results that internet users in America, India or Argentina get to see,” he said, adding that the court was right to recognise that the balance between privacy and free speech may vary around the world.

The European Commission backed Google in the case. Brussels on Tuesday said the judgment clarified that “the right to be forgotten applies within the EU and that search engine operators have to take sufficiently effective measures to ensure the protection of this right”.

“Within the EU, rules on data protection apply and have to be respected, and this applies to the right to be forgotten,” said a spokesman for the commission.

The right to be forgotten was enshrined by EU judges after a Spanish national brought a legal challenge against Google and a Spanish newspaper to remove links to a story about his home repossession from 1998.

1 Why gift a son now if it eats into his tax-free inheritance threshold?
2 Mortgage arrears: Prevention is definitely better than cure
3 Government to avoid ‘cliff-edge’ on Covid-19 payment changes
4 Chris Johns: Economic self-harm is the root of populism
5 Big Four told to outline plans for audit split in UK by October
Real news has value SUBSCRIBE