Google takes on Apple and Spotify with new music service

‘There’s nothing healthy about a duopoly’ 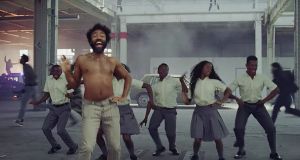 Childish Gambino’s video for This is America

Google is looking to dismantle the Spotify-Apple “duopoly” in music distribution, overhauling its music service this week in the fourth attempt at convincing YouTube’s billions of users to pay.

Google is unveiling a new music subscription service on Tuesday, and will promote it with YouTube’s most expensive advertising campaign. The service, called YouTube Music, mimics the Spotify model: there will be a free, ad-supported tier with more limited functions, and a $10 a month subscription without advertisements and with extra functions.

“There’s nothing healthy about a duopoly,” said Lyor Cohen, YouTube’s head of music, who helped shape hip hop in the 1980s and 1990s as manager to acts like Jay-Z and Run DMC.

He says that the dominance of Spotify and Apple, which have 125 million paying subscribers to their music streaming services and have been credited with resurrecting the industry, is “scary for musicians and for record labels”.

“To preserve this incredible opportunity the music business has, we need competition in distribution,” said Mr Cohen. “It’s not like it was 30 years ago, when some guy could rent a warehouse, buy a bunch of records and put a sign called Tower Records in front. Now you have to have a ton of engineers, a global footprint and a ton of money.”

Google has made previous forays into paid music streaming, such as Google Play, YouTube Key and YouTube Red, but none have proven a big hit and the competing services have confused customers. Meanwhile Spotify and Apple have added tens of millions of paying customers, powering a turnround in fortunes across the music business in recent years.

As technology groups rush to mould the music industry’s future, “there is more pressure on YouTube to up its game now than four years ago [with YouTube Key]”, said Mark Mulligan, analyst with Midia Research. “Spotify is closing the gap on YouTube as a music destination.”

YouTube’s latest push comes as music has become a bigger part of its business. YouTube is the world’s largest video site, and slickly produced videos by pop stars draws billions of views. The music video for Despacito, the smash hit of last year, was watched more than 5 billion times, while the poignant music video for This is America, Childish Gambino’s new song, drew 85.3 million views in its first week, according to Nielsen. About a third of YouTube’s advertising revenues came from music last year, up from 27 per cent in 2016, according to Midia Research.

Morgan Stanley analysts forecast that YouTube Music will draw 25 million paid subscribers by 2022, which would generate about $3 billion in annual revenue. However, they warn that “while we certainly take YouTube seriously, it has had Google Play music in the market for years and has not aggressively pushed a subscription music service under prior incarnations. Will this time be different?”

YouTube could also help mend the relationship between Google and musicians, which rely on YouTube for marketing but have complained for years that the tech behemoth does not pay them enough, taking the fight to Brussels and Washington.

YouTube in 2016 brought in Mr Cohen to help. For the past year the 58-year-old has been making his case to the large music labels, touting a new service to “make them rich”, according to executives involved in meetings. After a years-long stand-off with the big music companies, YouTube struck fresh licensing agreements last year.

Music executives are cautiously optimistic. “They’ve been talking about this forever, and in the past they’ve messed it up time and time again,” said a senior record label executive. “But people are positive about it in a way that they’ve never been positive about YouTube before. This product is not going to revolutionise the subscription music business, but it’s just as good as Apple and Spotify.”