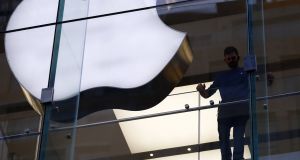 Both Apple and the Government are appealing the ruling on the grounds that Apple’s tax treatment was in line with Irish and European Union law.

Apple has transferred €1.5 billion into an Irish escrow account on Friday as the State begins to collect up to €14 billion of back taxes and interest the European Commission says is owed.

The Government expects that all of the money will transfer by the end of September, even as Apple and Ireland each pursue appeals against a 2016 European Commission decision that the US technology received illegal tax aid from the State .

Investment firms Goldman Sachs, Amundi and BlackRock had been selected in March to manage the back taxes and interest as the funds are held in escrow, pending the outcome of the European court appeals process. The Commission said that €13 billion of back taxes were owed between 2013 and 2014, with Apple estimating in its most recent set of financial accounts that the interest bill will come to about €1 billion.

“This is the first of a series of payments with the expectation that the remaining tranches will flow into the fund during the second and third quarter of 2018 as previously outlined,” Minister for Finance Paschal Donohoe said on Friday after the first transfer.

Earlier this week, US government lost in its attempt to help Apple fight its appeal against the Commission’s decision, with the EU’s highest court ruling that president Donald Trump’s administration failed to show it had a direct interest in the case. The US treasury department had previously openly criticised the Commission’s finding, saying that the European Union was making itself a “supra-natural tax authority” that could put global tax reforms at risk.

The commencement of payments follows the signing of a legal agreement between the Government and the US tech giant on how the escrow account will be handled.

The Government missed an original deadline of January 2017 to collect the money from Apple, as the logistics of setting up the biggest and most complicated escrow account in the history of European state aid cases dragged on.

Rather than transferring cash, Apple will mainly be moving bond investments, which will require careful management while held in the account.

BNY Mellon was picked earlier this year to provide custodian and escrow services in relation to the alleged Apple State aid recovery process. It will oversee the work of the three investment firms that will manage the funds.

Vienna digital rights group takes court action over DPC complaints progression 18:10
Court dispute over redevelopment of Setanta Centre may be put on hold 17:41
Amazon.com shares top $3,000 for the first time 17:29
Sean Dunne contempt case to be heard in November 17:17
NTMA to raise up to €1.5bn before stimulus plan 16:48

1 Can we finally say farewell to the scourge of hot-desking?
2 Why gift a son now if it eats into his tax-free inheritance threshold?
3 Amazon.com shares top $3,000 for the first time
4 Big Four told to outline plans for audit split in UK by October
5 Chris Johns: Economic self-harm is the root of populism
Real news has value SUBSCRIBE