Google Wifi review: strong wifi connection in every corner of the house 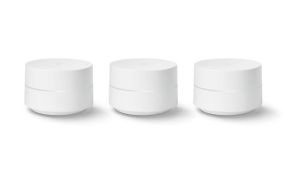 Wifi: simultaneously the biggest boon and biggest bane of my life. On one hand, it makes connecting everything so much easier around the house; on the other, it’s beset with problems caused by interference, too many devices trying to access the network, and dead zones where the router is that little bit too far from the devices trying to connect. It all adds up to a slightly disappointing experience.

But it doesn’t have to be that way. Short of physically moving the router to a new position – not always possible thanks to the siting of broadband access points in your home – you can get some add-ons that help boost your signal, make it more reliable and even make it faster. This particular wizardry is called a mesh network.

Sounds too good to be true? Well, the downside is that it’s not a cheap investment. But if you choose wisely, the cost is more than offset by the lack of frustration when your wifi once again lets you down.

There are a few options out there. I’ve already reviewed the Linksys Velop kit, which – while a bit on the pricier side – managed to improve both speeds and signal strength on my home network. So how does Google’s Wifi kit stand up to the competition?

If you want the short answer, it’s “very well”. And it costs €139 for a single device. For the more nuanced answer, read on.

Google Wifi is, as previously mentioned, a mesh network. What that means is that it uses a number of overlapping nodes to create a strong, consistent wifi network in the home. You plug one directly into the modem, and you can then add others around the home, placed to make sure your wifi network has full coverage.

Here’s the thing: you don’t always need more than one node. It depends on the size of your home. One of these Google devices will cover 85sq m (915sq ft), which may be sufficient. You get all the benefits of the device – faster and more consistent access – without having to spend on devices you don’t need.

Where you may need the extra nodes is if you are trying to cover an attic room, for example, if your modem is located on the ground floor. For this test, I used one Google Wifi device initially, and managed to cover the attic room, but with two it was more reliable.

If there is one thing I’ve learned over the years it’s that if you don’t keep it simple to set up, you may as well not bother. While some people will be happy to tinker with set-up processes, if you want the average person to use it – who may or may not have limited tech skills – you need to make it easy to get started. Google Wifi passes this test with ease. Simply plug in the Google Wifi node, open up the app and it immediately starts looking for devices.

Once you have everything set up, you have more control over your network. You can prioritise certain devices, making sure they get decent speeds at times when your network may be under pressure. You can also pause or cut off access to others, which may be an inducement for the younger members of the household to get to the table without too much persuasion.

All this can be done through the Google Wifi app too, so it’s almost effortless.

There was a definite boost in signal strength and reach in my home once the node was active. Speeds were also more consistent, and unlike before I used any mesh network, the numerous smart home devices that I use stayed connected. Another bonus of mesh networks.

The other thing that needs to be considered is aesthetics. No one wants bulky, ugly devices taking up space in their living areas. Google Wifi nodes are reasonably compact and sleek, so you won’t be tempted to shove them out of sight.

The Google Wifi devices just work, and work with minimal effort. The app guides you through everything you need – regardless if you are on iOS or Android – and even complete beginners can set it up in a few minutes.

The devices have also been well designed. While I still prefer the look of the Linksys Velop nodes, Google Wifi passes muster and it’s not something you feel the need to hide away.

It’s not the most expensive option at €139 for a single node, but it’s still extra cash you might not want to part with.

The app is well designed and easy to use. It will require a Google account to sign in though.

Cheaper than the Linksys, but a great option for better wifi in your home.