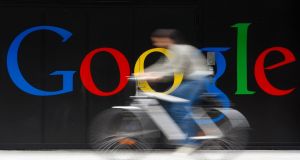 This year Google is expected to generate about $73.75bn in net digital ad revenue worldwide, a 17.8% jump from a year earlier. Photograph: Reuters/Christian Hartmann

Alphabet Inc reported a 27.7 per cent drop in quarterly profit as the company recorded a previously announced charge related to a record €2.4 billion (€2.06bn) fine imposed on its Google unit by the European Commission.

EU antitrust regulators last month hit Google with a record fine for favouring its own shopping service, taking a tough line in the first of three inquiries of its dominance in searches and smartphone operating systems.

The California-based company’s shares, which closed marginally up in regular trading on Monday, fell nearly 3 per cent to $969 after the bell.

Revenue was boosted by robust demand for advertising on mobile and the company’s popular video service YouTube.

This year Google is expected to generate about $73.75 billion (€63.35bn) in net digital ad revenue worldwide, a 17.8 per cent jump from a year earlier, according to research firm eMarketer.

Paid clicks, where an advertiser pays only if a user clicks on ads, rose 52 per cent. Analysts on average had expected a rise of 35.2 per cent, according to data and analytics firm FactSet. Paid clicks rose 44 per cent in the first quarter.

Revenue from its Google Other unit, which includes Pixel smartphone, Play Store and cloud business, rose 42.3 per cent to $3.09 billion.

The company changed the method it reports earnings in the first quarter, focusing on Generally Accepted Accounting Principles (GAAP) earnings instead of non-GAAP results.

In late June the European Commission fined Google for breaking EU competition rules by abusing its monopoly over internet search to unfairly promote its own shopping comparison service.

Google was given 90 days to put its search engine right or face daily fines of up to 5 per cent of the average daily turnover of Alphabet.

Separately, Google’s chief executive Sundar Pichai was added to the board of Alphabet on Monday. The appointment is another signal of his rising importance at the company.

He joins the company’s founders, Larry Page and Sergey Brin, its chairman Eric Schmidt and nine other veterans of technology, finance and automotive industries.

Outside of Google, Alphabet hosts several early-stage companies in a variety of sectors, including its self-driving car unit Waymo, and two healthcare efforts.

5 Will income taxes have to rise to pay for Covid-19 crisis?