Google device to offer faster wifi speeds in every room 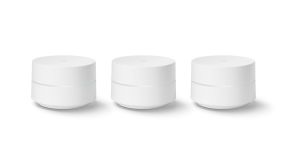 ‘Mesh’ network uses a number of overlapping nodes to create a strong, consistent wifi network in the home

Bad wifi coverage at home? Google is aiming to eliminate your dead zones, launching devices in Ireland that promise fast wifi in every room.

The new devices create a “mesh” network, which uses a number of overlapping nodes to create a strong, consistent wifi network in the home. One wifi device can be plugged directly into the modem, and you can then add others around the home, placed to make sure your wifi network has full coverage.

Once you are connected to the mesh network, you can move seamlessly between nodes, with intelligent software that automatically adjusts signal depending on your device, usage and location to make sure you have the best connection. It will choose the best channel and wifi band depending on your location in the home, with no user interaction necessary.

“It provides very strong mesh wifi for the entire house,” explained Sanjay Noronha, Google wifi product manager. “We’ve also made it aesthetically pleasing so you will want to put it out in the open.”

He likens it to expecting a single light bulb to light your entire house; the mesh network provides extra nodes – or light bulbs, to follow the analogy – to push your wifi into even the furthest corners of your home.

Google’s wifi devices need a tablet or smartphone for the initial setup, with the bulk of the work being done through an app. Mr Noronha said this was for security reasons, eliminating any web-based log in to the device. The entire set up is designed to take only a few minutes, and you can add multiple devices depending on the size of the property you want to cover. One device is expected to cover a home of up to 900 sq ft.

Users can also set up a guest network, or exercise parental controls over devices on the network, such as pausing wifi at mealtimes or shutting it off for certain devices when it’s time for bed.

Software updates are served every six weeks to the wifi devices, automatically downloaded and installed to keep up performance and security. “People just want their wifi to work,” Mr Noronha said.

The company has some competition though. Linksys already offers its Velop mesh system to Irish users through the Apple Store website.

1 Opioid executive admits to ‘no morals’ ahead of prison term
2 Volvo warns of scaled back car line-up if UK splits from EU rules
3 Who are Ireland’s 17 billionaires?
4 NI house builder apologises to Harry and Meghan over adverts
5 Little strategic thinking in election manifestos of Fine Gael and Fianna Fáil
Real news has value SUBSCRIBE