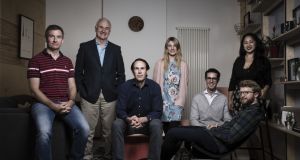 The Frontline Ventures team. The venture-capital firm aim to invest between €200,000 and €3 million in software companies at the pre-seed and seed stages over the next four years.

The fund, Fund II, will aim to invest between €200,000 and €3 million in companies at the pre-seed and seed stages over the next four years.

Frontline Ventures partner Will Prendergast said between eight and 10 companies would be funded each year.

The fund will target companies in Ireland, the UK and across Europe. Mr Prendergast said he expected Irish firms would make up a significant portion of ventures that received backing.

Among Frontline’s previous investments are Logentries and Orchestrate.io – both of which have successfully exited – Qstream and CurrencyFair. Its Fund I was raised in 2013, and invested in 27 software firms across Europe. It led to the creation of an estimated 350 Irish jobs, according to director of the Ireland Strategic Investment Fund Eugene O’Callaghan.

“The pace at which software companies are redefining industries is accelerating. Our first fund has shown us that some of the world’s most ambitious founders are right here,” Mr Prendergast said. “With this Fund II, Frontline is positioned to be the investment partner of choice for ambitious software entrepreneurs building out from Europe to the US.”

Frontline’s latest fund has been backed by the Ireland Strategic Investment Fund, Enterprise Ireland, the European Investment Fund and AIB, along with a number of pension funds and family offices.

The fund is managed by partners Mr Prendergast, Shay Garvey,William McQuillan and Stephen McIntyre, and has offices in Dublin and London.