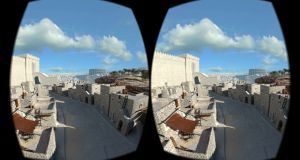 Virtual reality has been hailed as the next big thing in gaming and entertainment but it may also be a boon to archaeologists.

Australian archaeological start-up Lithodomos VR has created a VR experience for iOS and Android that allows the user to explore accurate 3D reconstructions of archaeologically significant sites of the ancient world.

This free app (used in conjunction with a VR headset) takes you through the Temple of Venus in Rome, the Odeon of Agrippa in Athens and the Arènes de Lutèce in Paris.

Not only does the experience feel immersive and vibrant, it is also approved by a professional archaeologist for accuracy.

Lithodomos VR has recently received AU$900,000 in seed funding so expect to see more wonders of the ancient world in VR form.

They also have a paid app called Ancient Jerusalem in VR, which takes the user through the city as it was 2,000 years ago, including the Western Wall and the Second Temple.