Five wearables that could help kickstart your New Year plans

Wearable trackers to keep your new year, new you plans on track 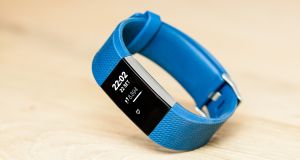 Wearable fitness trackers aren’t for everyone. But if you think they might help motivate you, here are few suggestions.

Made by an Irish company, LumaFit is more than a simple activity tracker. It’s designed for workouts, so it acts as an interactive personal coach while you work out, telling you you aren’t squatting low enough or doing your sit ups properly. Unlike other activity trackers, it’s worn over your ear so it measures whole body movement, and heart rate is monitored via a clip that attaches to your earlobe. Yes, you feel a bit daft wearing it at first, but it’s not the type of thing you wear all day in public, which minimises it somewhat. One other thing to note: it has two separate versions for Android and iOS, not just the apps, so choose wisely.

It’s also currently on offer in some stores for less than €70 - about half price.

Smartwatches may not have become the must-have that many thought they would, but if you are looking for something that will work well with your iPhone for notifications but also monitor your activity, the second generation of the Apple Watch is a good choice. The new version does essentially the same stuff as the original, but it’s waterproof, which means you can take it swimming, and it has GPS built in. That means you no longer need to carry your phone to track your run. The new version of WatchOS is faster too. The downside? It needs to be charged almost every day, usually overnight, which rules out sleep tracking.

Sometimes you want a tracker that’s a bit more subtle than the rest. The Misfit Shine 2 certainly fits that category. It’s a flat disc fitted into a silicon band, and apart from some LEDs on its face, there’s very little in the way of distraction. It monitors activity and sleep - no heart rate tracking here - and will also alert you when your smartphone has a notification or two. You can pop the tracker disc out of the band and attach it to your shoe or clothing if the wristband doesn’t suit too. The best bit? No charging. The Misfit Shine 2 is powered by a battery that lasts up to six months at a time. Its regular price is around €120, but a few bargains are around at the moment.

From €139 with the heart rate monitor

When it comes to running watches, Garmin is still a popular choice. The Forerunner 15 does all the essentials - monitors pace, distance, activity and calories - and will track you through GPS when you need it. You can pair it with a chest strap heart rate monitor to give you more accurate stats, but it’s not strictly necessary. If you want to use it as an activity monitor minus the GPS function, the battery will last for a few weeks; with GPS tracking for runs, you can get up to eight hours of tracking out of it. It’s also water resistant, so you can run in the rain or swim with it on.

Fitbit is all over this wearables thing. The company is on its second generation of Flex and Charge devices, and the Charge 2 is worth a second look for those who want to up their fitness game this year. It’s not as subtle as the Flex 2, but it comes with the ability to monitor your heart rate as you work out, bringing heart rate zones into the mix. The new version is sleeker than its predecessor and the straps can be swapped out, making it a bit more versatile than the original Charge. The battery life is around five days, which is better than many trackers in this category.