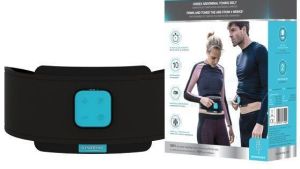 The Slendertone Abs8 has seven programmes you can use while going about your daily business, while the remaining three are used during exercise.

We all love a bit of a shortcut. I mean, why wouldn’t you? It gets you where you want to go with less effort and in a quicker time.

Shortcuts in health and fitness, however, are usually a bit rarer. Who wouldn’t love the idea of increasing their fitness with very little effort? Or dropping a clothing size or two while making very few changes to your diet?

The truth is there is no shortcut. But like most things in life, there are always things to give you a helping hand.

Did you know that the company that makes Slendertone belts is based in Ireland? It turns out it’s a Galway company, called Bio-Medical Research.

In my head, Slendertone belts were right up there with television infomercials: seems like a good idea but you’re never really sure if they’re actually any use. It’s a bit like magic beans. I’ve used them – and the cheap imitations of them – in the past and I didn’t feel they worked for me. But I was willing to be proved wrong. I hate sit-ups and stomach crunches, so anything that can help me avoid those gets at least a second look.

I wasn’t expecting miracles. Ab stimulators don’t actually make you lose weight; they stimulate your muscles so everything tightens up and you look thinner. Imagine doing a half an hour of stomach crunches twice a day and you get the general idea.

But Slendertone is still around, and adapting for the new generation. The company has everything from app-connected belts you can control from your smartphone to its new Abs8 toning belt, which dumps the app and goes for a rechargeable device that attaches to a stretchy belt. It charges over micro USB in about three hours, and lasts for a good few sessions. Plus it’s easy to take on and off the belt, because it is a magnetic fixing.

There are some gel pads that are positioned on the belt to suit your individual shape; they need to be replaced after a while, but they lasted several weeks with regular sessions every other day.

The Abs8 has some useful features that the previous generation certainly didn’t. It is shaped to fit your abs better than previous belts, and if you get it positioned correctly, it will stimulate your oblique muscles The OLED display faces up so you can see your time, programme and level at a glance.

There are 10 to choose from; seven are programmes you can use while going about your daily business, and the remaining three are used while exercising.

All that is great, but does it actually make you feel like you’ve done ab exercises? It depends on the level you choose and how often you use it.

I got a bit cocky and whacked it up to over 50 on the most intense programme. And kept it there, for five sessions in a row. On the initial run it was fine for the most part; there was a definite effect but it was manageable. It was at the end of the programme that the decision came back to bite me. The intensity ramps up over the course of this particular programme, so the pulses are more intense and last longer at the very end. Unfortunately, that coincided with me standing in a shop, paying for my lunch, as the pulse hit hard and forced me to lean noticeably to one side.

The next few sessions were done at my desk (surreptitiously, apart from the odd beep here and there). Hence the decision to keep going past the four sessions that I was told would probably be the maximum you should attempt in a day.

That cockiness came back to haunt me again the next morning. When I woke up, my abdomen was sore. On a scale of one (able to move freely) to 10 (post-bootcamps, when log-rolling out of bed was a more realistic option than sitting up), it registered around a seven. Which for sitting down all day and not doing an actual stomach crunch wasn’t bad.

To see any real change, you’ll need to keep it up for several weeks – at least four but it was more like five or six before I noticed any real difference. It wasn’t dramatic either, more like a couple of centimetres, but a flatter stomach was all I was really after.

If you are realistic about what the Slendertone Abs8 can achieve, you should see some results. But it takes repeated and regular use. It’s slim and discreet enough to wear in work, as long as you ignore the beeping.

Because the gel pads can be positioned for each user, you are more likely to get something that suits your body shape.

Also, the decision not to bring your smartphone into it means you aren’t tethered to your now-overburdened phone.

It can be a bit uncomfortable at times. Also, you’ll have to remember to charge the unit regularly, and you’ll need to invest in replacement gel pads.

You get a few hours of workouts out of a single charge, and the decision to use micro USB means you will have easy access to a cable. The price may also be a sticking point for some people. This will cost you €150; sit-ups are free.

An add-on to your fitness regime, rather than a replacement for it.