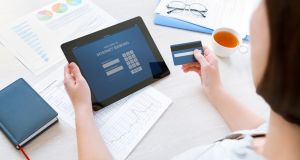 Revolut, a mobile-based fintech firm which has 50,000 customers in Ireland, has applied for a European banking licence and begun building its own in-house payment processor as it seeks to roll-out the world’s first global banking app.

Revolut, a mobile-based fintech firm which has 50,000 customers in Ireland, has applied for a European banking licence and begun building its own in-house payment processor as it seeks to roll-out the world’s first global banking app.

The company said it expects to be granted the banking licence, which will allow it to offer additional credit and deposit services, and protect client funds up to €100,000, early next year.

Details of the announcement were announced on the sidelines of the Web Summit in Lisbon.

Speaking to The Irish Times, Revolut founder and chief executive Nikolay Storonsky said the company had delayed applying for the banking licence until now because its main focus had been on building the best platform possible.

“Even without a banking licence, we have attracted over 950,000 users across Europe,” he said.

“Obtaining a licence will be good for our customers in Ireland and elsewhere as it will allow us to provide more services,” Mr Storonsky added.

Revolut allows users to open a current account in 60 seconds, exchange currencies at the interbank exchange rate, transfer to any bank in the world, and spend fee-free in 120 currencies with a contactless MasterCard.

In just two years, the London-based company has signed up over 900,000 users across Europe and processed 42 million transactions with a total volume transaction of $6 billion to date.

Earlier this year Revolut launched business accounts across Europe, allowing companies to hold, exchange and transfer in 25 currencies,and issue employees with free corporate spending cards to reduce expense costs. Revolut currently has over 16,000 business customers, including more than 500 in Ireland.

The company, which launched in Ireland in early 2015, has said it is intent on disrupting Irish banks by allowing users to spend globally at the real exchange rate and eliminating unfair fees for standard transactions, contactless payments and ATM withdrawals.

Revolut raised $66 million (€58 million) in July in a Series B round led by Index Ventures . to fund expansion across Asia and North America. Total investment in the finch, which was launched by Nikolay Storonsky and Vlad Yatsenko in July 2015, now stands at $90 million.

It recently appointed William Keane as country manager for Ireland and opened up an office in Dublin.

1 John FitzGerald: North needs reform more than unity
2 If lockdown has morphed from tactic to strategy, the State has failed
3 Guinness brings out a non-alcoholic version of the black stuff
4 How long can Government afford to keep State pension age at 66?
5 Sherry FitzGerald aims for bigger share of broker market
Real news has value SUBSCRIBE