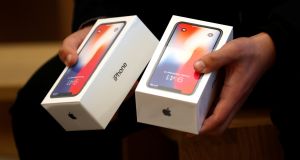 Apple has confirmed all of its global sales outside of the United States are recorded in Ireland.

This indicates the sales recorded by its operations in Hollyhill Industrial Estate, Cork, are in the region of $137.9 billion (€119.2 billion) per year.

An Apple spokesman told The Irish Times earlier this week that it had paid Irish corporation tax of $1.5 billion in the three years 2014 to 2016. This equates to approximately $500 million per year.

“Apple pays tax at Ireland’s statutory 12.5 per cent,” Apple said in a statement on Monday night in response to International coverage of its tax affairs in this and other media outlets. Apple has not made a figure available for its profits recorded in Ireland.

The technology company introduced significant changes to its non-US structures in 2015 in the wake of Ireland’s decision to close a controversial tax loophole used by the corporation.

However, the data published by Apple indicates that the restructuring, which ended the use of Irish subsidiaries that were “stateless” for tax reasons, has not increased its global tax bill.

The figures appear to confirm that only a small proportion of the profits being booked through Ireland by a corporation often described as the most profitable in the world, are being subjected to Irish tax.

They also indicate that Apple’s restructuring has not led to an appreciable increase in the level of tax it is paying in Ireland.

The Apple spokesman said the company paid $1.5 billion in Irish tax between 2014 and 2017 in the context of the then imminent release of the Paradise Papers, which have revealed that Apple responded to the closure of the Irish tax loophole by having two of its Irish subsidiaries take up tax residency in the offshore island of Jersey.

The third of its three Irish subsidiaries that were formerly “stateless” for tax reasons, Apple Operations Europe, is now tax resident in Ireland.

In a new statement issued last night in response to the Paradise Papers disclosures, Apple said when a customer buys an Apple product outside the US, the profit is first taxed in the country where the sale takes place.

“Then Apple plays taxes to Ireland, where Apple sales and distribution activity is executed by some of the 6,000 employees working there.

“Additional tax is then also due in the US when the earnings are repatriated,” the statement said.

This confirms that Apple’s non-US sales continue to flow through Ireland after its 2015-restructuring.

In relation to Apple’s $252 billion cash pile, much of which is believed to be untaxed profits that went through its Irish subsidiaries, the statement said Apple has cash “overseas [outside the US] because that’s where it sells the majority of its products”.

The corporation has earmarked more than $36 billion to cover deferred US taxes due on this cash, whenever it is repatriated to the US.

“When Ireland changed its tax laws in 2015, Apple made changes to its corporate structure to comply. Since then all of Apple’s Irish operations have been conducted through Irish resident companies,” the spokesman said.

The statement did not respond to speculation in this and other media outlets involved with the Paradise Papers project, that Apple has used Ireland’s capital allowances regime to avoid having to pay tax on massive profits being booked through Ireland.

In 2014 then minister for finance Michael Noonan changed Ireland’s tax rules so that all of a corporation’s annual profits could be written off using capital allowances. Up to then, only 80 per cent of each year’s profits could be sheltered from tax in this way.

Despite being invited to do so, the corporation did not respond to speculation that Apple Operations Europe, which is now tax-resident in Ireland, may have spent tens of billions of euro, and possibly well in excess of €100 billion, on intellectual property which it brought from Apple subsidiaries now based in zero-taxed Jersey.

That expenditure could be used to completely write-off the need to pay tax on profits booked by Apple Operations Europe, because the 80 per cent cap was removed.

Last year Apple’s global sales were worth $215.6 billion. The latest figures released by the US multinational show that, as of earlier this year, 64 per cent of its global sales are outside the US.

There has been no dramatic change in the amount of tax Apple pays globally since it restructured its non-US operations in response to the closure of the Irish tax loophole.

The European Commission has said Apple should pay €13 billion, plus interest, to Ireland, on untaxed income earned by Irish-incorporated Apple subsidiaries that were for a period of years stateless for tax purposes.

Apple, and the Government, are contesting the finding.