Facebook’s Libra backers look to distance themselves from project 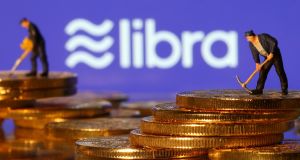 The 28 members of the Libra Association made a non-binding pledge to invest at least $10 million (€9 million) in the project. Photograph: Dado Ruvic/Reuters

Intensifying regulatory scrutiny of Facebook’s Libra digital currency has spooked some of the project’s early backers, with at least three privately discussing how to distance themselves from the venture.

The 28 members of the Libra Association, which include Visa, Mastercard, Uber, Spotify and the Facebook subsidiary Calibra, made a non-binding pledge to invest at least $10 million (€9 million) in the project, which Facebook unveiled in June, with the aim of shaking up the global payments market.

However, the proposed currency has prompted a fierce backlash from global watchdogs and politicians, including an official investigation by European Union antitrust officials. Two of the project’s founding backers said they were concerned about the regulatory spotlight and were considering cutting ties. Another backer said they were worried about publicly supporting Libra for fear of attracting the attention of agencies who oversee their own businesses.

“I think it’s going to be difficult for partners who want to be seen as in compliance [with their own regulators] to be out there supporting [Libra]” one of the founding partners said.

With Libra’s backers not speaking out in support of the digital currency, Facebook in turn has become exasperated by the members, according to two people close to the project.

“Facebook is tired of being the only people putting their neck out,” said one of the Libra backers.

While Libra’s founding members are generally supportive of the concept of a new currency that could broaden financial inclusion, two of the companies said they had held discussions about what the “right next steps” should be.

“Some of those conversations [about regulation] should have taken place before the launch, to understand how regulators would think about this, so there wasn’t so much pushback,” one of the Libra backers said. – Copyright The Financial Times Limited 2019

1 Life as a Facebook moderator: ‘People are awful. This is what my job has taught me’
2 Bank leaked my loan request to family who tried to rip me off
3 Irish companies restrict travel over coronavirus fears
4 Digicel plots network-sharing deal amid ‘tight’ cash levels
5 Suspicions rife as key Brexit trade talks begin in Brussels
Real news has value SUBSCRIBE