Donald Fitzmaurice and Padraig McBride of Brandtone speak about the ability to reach the world from a team of 100 people, 50 in Ireland and 50 across the globe. Video: EY 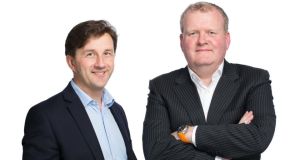 Donald was previously executive chairman of Intivation, a global leader in solar-powered mobile handsets. Prior to this he was a partner with DFJ-ePlanet Capital, and a professor of chemistry at University College Dublin where he taught and researched in the field of nanostructured materials.

Padraig was previously the chief financial officer of Digicel Group in the Eastern Caribbean.

Prior to joining Digicel, he was financial controller of boutique US investment bank Brown Brothers Harriman’s Irish operations.

Since its inception in 2010, Brandtone has grown its presence across the globe and now operates in 12 markets, including: South Africa, Kenya, Nigeria, Russia, Colombia, Brazil, India, Thailand, China, Vietnam, Indonesia and the Philippines. The company, which has 120 employees, uses the concept of “sustainable engagement” to help brands build one-to-one relationships with consumers at scale.

These relationships help Brandtone to deliver campaigns that close the loop to purchase, yielding measurable outcomes that can be optimised in real time.

What vision/lightbulb moment prompted you to start up in business? The next one billion consumers live in the developing and emerging markets, and the future growth of global consumer brands depends critically on winning their hearts and minds.

Our lightbulb moment came when we realised that mobile provides the best – and often the only – way for brands to engage consumers in these markets.

All we had was 10 minutes, three slides and a laptop, but it worked. In fact, that pitch also helped us to secure our first round of funding – so it was a significant moment in terms of Brandtone’s success today. What was your “back-to-the-wall” moment and how did you overcome it? When we were asked to run a campaign that would become the largest ever mobile promotion in India, at just 12 weeks’ notice.

Our teams in Dublin and Mumbai had to work flat-out for weeks and, what’s more, the client doubled the size of the campaign at the last moment. In the end, the campaign was a success and Brandtone are established as a leading provider in this critical market.

Have you started to feel the effects of the economic upturn within your sector/industry? Economic recovery helps everyone in business but, as a business that operates in the fastest-growing developing markets, we have been largely insulated from the economic downturn in the developed markets. Also, the global shift in marketing budgets from traditional to digital content and channels - especially to mobile content and media - has been rapid and has further insulated Brandtone.

In order to fulfil our ambition, we had to personally fund the initial development of the business - a hard thing to do at the height of the financial crisis.

Describe your growth funding path: Over the past five years, Brandtone’s growth has been supported by the funding we have been able to secure.

To date, this has included three rounds of funding, the first led by Unilever Ventures, the second by Verlinvest and the third by global agri-business Syngenta.