Estonia’s digital summit proves much is still lost in translation 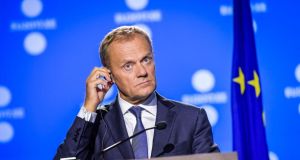 This is Estonian, apparently, but gibberish, was how an Estonian journalist put it.

So I put the sentence back through Google Translate this time, and came up with “World workers unite you, if you have nothing to lose but their chains”. Not much better.

The lesson for revolutionaries wanting to machine-translate Karl Marx’s original words – “Workers of the world unite, you have nothing to lose but your chains” – would be to wait. The science of automatic translation is not there yet.

The folks at translate2017.EU, a project for the Estonian presidency, were promising much about “being better than Google”, and boasting of how they used brain science and its understanding of neural networks to revolutionise computer translation. As my old teachers would say all too often, “room for improvement”.

The translation stand was one of about 20 on view at the DigitExpo for heads of government and press hangers-on at the Tallinn Digital Summit. Putting widely different, imaginative practical applications on the technological revolution, the Estonians said.

There was also a motorised delivery trolley – a bit like a large picnic ice box on wheels – that could deliver your shopping to your door up to three kilometres away with an accuracy of two centimetres. The future of Chinese takeaways, apparently.

These “starship robots” are steered using the company’s own mapping technology and defended from theft by cameras and locks. It has been tested over 80,000km so far and is yet to suffer from vandalism or theft, this sceptical journalist was told. Coming to a street near you soon.

Or there’s an artificial intelligence (AI) based system for teaching languages that promises, by studying the “memory curves” of the user, to increase learning speeds by up to 10 times. It should get together with the translators.

Or a new silicone heart. And the Estonians are very proud of their innovation in e-signing and e-identity protection. There was a brain-mapping project on display too – its copying of neural networks allowing the creations of new forms of computer.

Researchers into the nanotechnology of graphene – a 20-country project that includes our own Trinity College – were waxing lyrical about how you can apply ultra-thin, one-atom deep, films to aircraft wings to add strength and protect against lightning strikes.

Graphene, a form of carbon, is stronger than steel and one-fifth of its density and weight.

I’ve seen the future, and it works. Mostly. But the Estonians, determined to cajole Europe into leading the digital revolution, have made a point well.

1 Coronavirus: How the Covid-19 crisis may reshape air travel
2 Euro finance ministers agree €500bn package to address pandemic fallout
3 ‘In Austin, there just seems to be something for everyone here’
4 Tesla hopes to re-ignite China sales with new pricing for locally-built Model 3s
5 Dutch go out on limb in fractious negotiations on aid for fellow EU states
Real news has value SUBSCRIBE