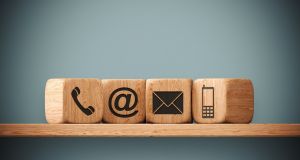 In 2017 just 9 per cent of people used email to make queries or carry out transactions with public services. Last year the figure soared to 29 per cent. Photograph: iStock

Email has overtaken the traditional telephone call for the first time as the most popular way people get in touch with the State’s public services.

The number of people contacting the likes of social welfare offices, Revenue and the Passport Office electronically has more than tripled over the past two years, findings in an official study show.

In 2017 just 9 per cent of people used email to make queries or carry out transactions with public services. Last year the figure soared to 29 per cent.

Over the same period, numbers choosing to pick up the phone to make queries or carry out transactions has fallen sharply, from 42 per cent to 28 per cent.

The findings are published in the latest civil service customer satisfaction survey, which is carried out by Ipsos MRBI for the Department of Public Expenditure and Reform.

“[Email] is now the main interaction method, narrowly ahead of telephone for the first time,” the report notes.

There has also been a steady decline over the past decade in the number of people turning up at Irish public offices to deal in person with staff over the counter.

Last year, less than a quarter (23 per cent) of people chose to, or were able, to have a conversation in person with their local public services offices.

And although a small proportion of people still use pen and paper to engage in written correspondence with public servants, letter writers are also in steep decline, the study confirms.

Two years ago, 12 per cent of people dealing with public services did so through the post. Last year the proportion had halved to just 6 per cent.

The survey showed more than a tenth (11 per cent) of interactions are now through online portals and websites, with smaller numbers getting in contact through apps (2 per cent) and webchat (1 per cent).

Pollsters carried out face-to-face interviews with a nationally representative sample of more than 2,000 adults in March last year for the study, the eighth of its kind since 1997.

They found that less than half (48 per cent) of the population had any dealings with public services over the previous 12 months.

The three most contacted offices are Revenue Commissioners (18 per cent), the Passport Office (15 per cent) and offices under the Department of Employment Affairs and Social Protection (13 per cent).

1 ‘Unlike other places in the US, you can actually afford to live here’