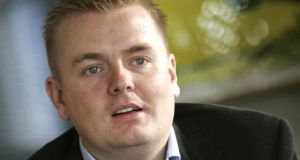 Cubic Telecom chief executive Barry Napier. The company has raised a total of €75m since it was founded in 2006

Irish technology firm Cubic Telecom has raised €40 million in a Series C investment round, with the Irish State among the backers.

Qualcomm and Audi Electronics returned to back the Dublin-based company in the latest round, with new investors including Valid Soluciones Technologicas and the Ireland Strategic Investment Fund (ISIF), an €8 billion fund which is managed and controlled by the National Treasury Management Agency.

ISIF, which replaced the National Pensions Reserve Fund in 2010, is designed to support economic activity and employment in the Republic.

Cubic is a mobile connectivity company established by Barry Napier. The company has raised a total of €75 million since it was founded in 2006.

The new investment will be used to refine the company’s IoT platform and aid expansion overseas. Cubic also said it intended to expand its engineering capabilities in Dublin.

The company, which currently employs about 140 people, last year announced 60 new jobs in Ireland following an international deal with Audi to bring connectivity to cars through the installation of a sim card that creates a wifi hotspot for the vehicle.

Paschal Donohoe sees consumer ‘prize’ in slow reopening of economy 11:53
PHP to invest €18m in Co Wicklow primary healthcare centre 11:22
Roadie 3 offers tuning at its absolute finest 10:57
Draper Espirit makes provisions of €110m as Covid-19 hits companies 10:55
Four things that must happen to get us out of Covid-19 recession 10:50

1 Ross O’Carroll Kelly column 'not racist towards English people'
2 Brown Thomas and Arnotts shoppers will be able to book time slots for entry
3 What is in the EU’s €750bn recovery plan and how will it affect Ireland?
4 Four things that must happen to get us out of Covid-19 recession
5 Beware of the rush to get back to normal business amid Covid-19
Real news has value SUBSCRIBE