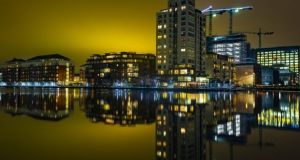 Dublin has fallen four places to 34 in a ranking of smart cities with the lack of affordable housing, air pollution and traffic congestion cited as the reason for the decline.

Singapore, Helsinki and Zurich topped the table of 109 smart cities in the ranking, which has been jointly developed by the Institute for Management Development (IMD) and the Singapore University for Technology and Design (SUTD).

The smart city index ranks cities based on economic and technological data, as well as by their citizens’ perceptions of how “smart” their cities are. More than 13,000 people globally were surveyed for the latest study in the midst of the coronavirus lockdown.

Dubliners expressed their greatest concerns over traffic congestion and air pollution, with both categories ranking worse than in the previous edition of the ranking. Most importantly, some 86 per cent of those surveyed, thought that finding affordable housing with rent at less than 30 per cent of their monthly salary, was a problem.

Other concerns expressed by Dubliners related to health services, security and public transport.

The authors said these results should give Irish authorities some clear indications as to what problems should be tackled first.

“Leaders need to work hard to align their efforts to the main concerns of their citizens,” they said.

The study shows that cities with better technology have managed the coronavirus pandemic much better. It also suggests the Covid-19 crisis is likely to widen inequalities between the haves and have-nots of connectivity, both among and within cities.

This year’s rankings also highlighted the ability of countries to develop cities beyond their capital. In the latest study, Bilbao fares better than Madrid, and Birmingham this year improved by 12 positions whereas London jumped just five.

1 How much state pension will I get next year?
2 Oxford Covid vaccine trials offer hope for elderly
3 Ulster Bank to introduce new card payment controls on app
4 Covid-19 will worsen shortage of accountants, says CPA Ireland
5 Guinness brings out a non-alcoholic version of the black stuff
Real news has value SUBSCRIBE