Tesco and Manna to offer drone deliveries in Galway 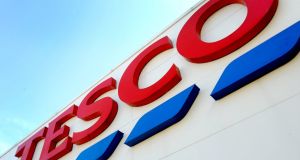 The trial is aimed at ‘small baskets’, a market Tesco says will be worth £10 billion (€11 billion) in the UK in the coming years. Photograph: Nick Ansell/PA Wire

Tesco has teamed up with drone delivery company Manna on a trial that will see grocery deliveries by drone to customers in Co Galway.

The trial is set to begin late next month, giving shoppers in Oranmore the chance to have essentials delivered by drone.

The trial is aimed at “small baskets”, a market Tesco says will be worth £10 billion (€11 billion) in the UK in the coming years.

“We are interested to see how drones could be part of the solution to deliver to our customers on-demand small baskets,”said Claire Lorains, group innovation director with Tesco. “If our trial with Manna is successful, we believe there is an opportunity to reach many customers through our stores, extending via our drone service.”

Further details of the trial have yet to be clarified.

“Manna has already proven the capability,” said Dave Lewis, Tesco’s group chief executive. “The question is how do we take that capability and apply it to Tesco? That’s the detail that’s being worked on.”

The announcement was made as part of Tesco’s “Red Door” initiative, which invites innovators with new products, ideas or emerging technologies to work with its innovation team.

Any expansion of Manna’s drone delivery services will require the backing of the Irish Aviation Authority.

Founded by entrepreneur Bobby Healy, Manna’s drone service was originally conceived as a way to deliver to customers quickly and easily, with the company focusing its trials on restaurants. Its drones can travel at speeds of up to 80km/h.

The company had been preparing for a test of its service in April, but the pandemic delayed matters. The start-up had intended to pilot a takeaway food delivery service on the campus of University College Dublin in March, with drones delivering food directly to students and lecturers, and had signed up takeaway service Just Eat and restaurant Camile Thai as its first commercial partners.

But it had to postpone the launch due to the Covid-19 outbreak and the subsequent closure of UCD along with all schools and colleges around the State.

1 In this strangest of recessions, what happens next for Ireland?
2 Chris Johns: Boohoo exposed on pay and conditions in digital economy
3 Hotel bookings collapse in wake of additional Covid restrictions
4 FBD changes wording of business insurance policies amid fight over virus payouts
5 Michael O’Leary is the boss you want to lead an airline out of crisis
Real news has value SUBSCRIBE