Connor Murphy now heads up the Berlin chapter of Techstars, the prestigious global accelerator programme that has backed close to 1,300 companies globally 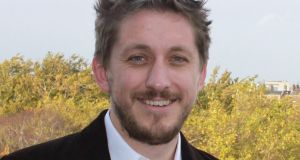 Datahug co-founder ConnorMurphy: had already stepped back from leading Datahug prior to its sale but he admits it was still hard to say goodbye to a business he had brought so far.

Selling his company Datahug two year ago was a “bittersweet” moment for its co-founder Connor Murphy. But while not ruling out stepping into the ring again at some point, the entrepreneur insists he gets to enjoy all the buzz of being in a start-up in his current role.

Having sold the sales forecasting company he founded with Ryan Smith to Nasdaq-listed Callidus Cloud in 2016 for $13 million in 2016, Murphy ended up in Berlin where he now heads up the local chapter of Techstars, the prestigious global accelerator programme that has backed close to 1,300 companies globally.

“Nothing is the same as running your own start-up but this is the next best thing,” Murphy tells The Irish Times on a recent visit back to Ireland.

“Being a founder is akin to being a parent while as an investor and mentor for Techstars, it is more like being a grandparent. You experience all the joy and struggle associated being intimately involved with start-ups in the accelerator programme. Unless or until I have a great idea that makes me want to go out and do something myself again, I’m happy with this,” he says.

Murphy had already stepped back from leading Datahug prior to its sale but he admits it was still hard to say goodbye to a business he had brought so far. Nonetheless, he’s moved on since then.

As the managing director of the SAP. iO Foundry, where he supports fledgling entrepreneurs building applications in the machine learning and SaaS (Software as a Service) space, he plays a critical role in bringing together start-ups to work with one of the world’s largest enterprise software companies.

Murphy, who is in Dublin the week we meet to partake in a fireside chat for Start-up Grind, is also scouting potential applicants for the second wave of the SAP.IO Foundry programme.

The inaugural programme attracted application from 58 countries, including Ireland. This was whittled down to 10 companies who went through the accelerator with SAP and graduated in December.

Not surprisingly, Murphy sees participation on the accelerator as a great opportunity for early-stage companies.

“As much as 75 per cent of every transaction in the world goes through an SAP system so if you’re building something in finance, recruitment, expense management, procurement and so on it is likely that you’re going to have dealings with them anyway so this is a great way to partner with them,” he says.

“If you’re a start-up with a lot of innovation you usually lack distribution whereas SAP has 380,000 customers, so if you can plug into their distribution network then you’re really onto a winner,” he adds.

As if proof of this were needed, he recounts how four companies who participated in last year’s programme are now working with SAP customer Beiersdorf on paid pilot projects.

“We had a number of Fortune 500 companies from SAP’s customer network into us and they left with at least 10 paid pilots with another 10 to 12 in the pipeline,” says Murphy.

“We invest in the companies who are selected for the programme but more importantly, by joining start-ups together with SAP, we can help them get to market far quicker than they would on their own,” he adds..

This theory very much fits with the general ethos of Techstars, which started in Boulder, Colarado more than a decade ago. Murphy smartly describes the organisation as being an application programme interface (API) between corporates and start-ups that is a trusted middleman who can bring the two sides together to work.

Given the Irish link to Techstars, it is something of a strange thing that it doesn’t have its own dedicated programme in Ireland. In addition to Murphy, who hails from Cork, mentors on the SAP.IO Foundry programme in Berlin include Will Prendergast of Dublin-based VC firm Frontline Ventures and Ronan Perceval, chief executive of Irish salon software company Phorest. As if that weren’t enough, Eamonn Carey is now managing after the London chapter of the organisation.

Like Carey, Murphy is keen to see a dedicated programme in Ireland and as with his counterpart, also envisages that if this does happen, it would likely be a vertically-focused one in an area such as foodtech, agritech or travel.

“Dublin is one of the top three or four cities we’re looking at and I’d love to bring Techstars here. It’s worth remembering how quickly things can change because three years ago we didn’t have a presence in Berlin and now we have four accelerators there,” he says.

In the meantime, he is keen to point out that the organisation already does have a presence locally through initiatives such as Launchpad and Start-up Boost. The latter is a 6- week pre-accelerator programme that arose from the ashes of Techstar’s former Startup Next.

Techstars and Start-up Boost, which is headed up in Dublin by Gene Murphy, formerly a co-founder of Startup Next Ireland and now entrepreneur-in-residence at Bank of Ireland, recently announced they were to join forces to run programmes together, a move that will be likely welcome by entrepreneurs both here and overseas.

Meanwhile, the former head honcho at Datahug is looking forward to the next instalment of SAP.IO.

“Every now and then I’m in meetings with start-ups on the accelerator and I think ‘oh man, I should just split and join their team’”, he admits.

“What makes a good start-up for me is always the back story. If someone just says they started a business because they spotted a gap in the market and wanted to make enough money, I think fair enough but that doesn’t really move me personally. What gets me is finding out the answers to ‘why you and why now’?” he added.