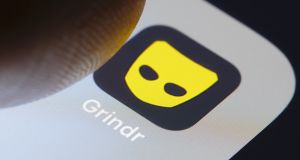 Gay dating app Grindr has defended its practices after a BuzzFeed report that it sent sensitive user data - including HIV status, location and email - to at least two third-party services.

The company said the data sharing was “standard” in the industry and that it considers its app a “public forum”.

Grindr’s privacy dust-up is likely to be echoed in the coming months as more companies face heightened scrutiny for years-old practices around user data.

Facebook’s scandal involving information used by political advertising firm Cambridge Analytica prompted many of the social network’s users to re-examine all the third-party applications they agreed to share data with, and showed how little they knew about the way the information was spread.

Grindr lets its users choose whether to specify their HIV status and the date they were last tested.

The company then uses services like Apptimize and Localytics to analyse how mobile users interact with the app. In the process of doing so, it sent those companies its users’ HIV status and “last tested date” along with GPS data, phone ID and email, according to BuzzFeed.

That move angered users who felt they didn’t agree to have their data sent to companies beyond Grindr.

In its response, Grindr chief technology officer Scott Chen said Grindr did not and would not sell that data to third parties or advertisers but does “work with” vendors to improve the app, which involves sharing data.

He added that “there are data retention policies in place to further protect our users’ privacy from disclosure.”

Facebook is currently struggling with having given data to third parties, but failing to enforce how it was used or retained.

Grindr also suggested that if users didn’t want their data being shared with these companies, they shouldn’t have volunteered it.

“It’s important to remember that Grindr is a public forum,” Chen said in the statement. “You should carefully consider what information to include in your profile.”

Grindr was founded in 2009 and didn’t raise outside funding until it sold a 60 percent stake to a Chinese gaming company in 2016. The company, Beijing Kunlun Tech Co bought the remaining stake from Grindr founder Joel Simkhai in January.

Apptimize didn’t immediately respond to a request for comment. Bryan Dunn, the vice president of product at Localytics, said in a statement that Localytics does not “automatically collect” a user’s personal information.

“It is up to each customer to determine what information they send to Localytics, and Localytics processes that data solely for the customer’s use,” he wrote.

“We do not share, or disclose, our customer’s data.”