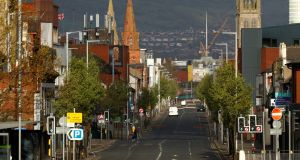 Concerns have been raised in the North that the number of coronavirus-related deaths has been under-reported and the daily statistics do not reflect the full picture of the progression or impact of the virus.

Figures released each day by the Public Health Agency (PHA) record the number of people with a positive diagnosis of coronavirus who have died in hospital.

They do not include those who may have died in other settings, such as care homes, or who had not been tested for coronavirus.

The deaths of six further patients with coronavirus, also known as Covid-19, were announced in Northern Ireland on Monday, bringing the total number of fatalities to 124.

An additional 76 cases of coronavirus were confirmed. A total of 1,882 cases have now been identified in the North and more than 12,500 tests have been carried out.

The chair of the west Belfast Federation of GPs, Dr George O’Neill, told BBC Radio Ulster that the “daily death toll here is not reflecting the number of people dying in care homes, and that is worrying”.

This meant, he said, that “Northern Ireland’s figures are much higher”.

The PHA was contacted for comment, but had not responded by the time of going to press.

The North’s Health Minister, the Ulster Unionist MLA Robin Swann, revealed last week that there were cases of coronavirus in 20 care homes.

On Monday it emerged that four residents in a west Belfast carehome who had been diagnosed with coronavirus, as well as a suspected fifth case, had died since Thursday.

The director of Our Lady’s Care Home, Gareth Macklin, said staff were “devastated” and were continuing to follow official guidance “to implement our comprehensive contingency plan and infection control procedures”.

The chair of the Northern Ireland Assembly’s health committee, the Sinn Féin MLA, Colm Gildernew, said it was “important that decision-makers have the best evidence to inform their actions” and the “gaps in data between recorded cases and the true number of cases could be detrimental now, and in the future, with regards to understanding the impact of Covid-19.”

GPs have also written to the North’s Department of Health (DoH) warning that they may be forced to withdraw services if more personal protective equipment (PPE) is not provided. Five million pieces of PPE were delivered to Northern Ireland last week, and the DoH said distribution will be completed by Wednesday.

Meanwhile, the Police Service of Northern Ireland operation to encourage the public not to make unnecessary journeys and to follow guidelines over social distancing will continue on Tuesday.

An additional 120 police units were deployed over the Easter weekend at checkpoints on main roads or to and from beauty spots and at transport hubs.

They also attended a number of reports of house parties or barbecues, as well as children being taken to play at friends’ houses.

A total of 107 fines were issued, and 1,500 breaches of social distancing guidelines have been reported to police via an online portal.

The Chief Constable, Simon Byrne, said on social media that there had been an “increase in fines and warnings over the weekend” but the “vast majority of the public” were adhering to the regulations and he was “pleased with the positive and responsible approach adopted by the public”.