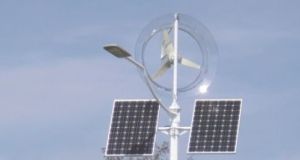 The company recently completed deals with Lidl, Intel and Microsoft, and has expanded in to new markets in Europe and Canada with a further expansion planned for early 2018 involving UAE and Australia

Co Longford-founded cleantech firm Airsynergy has won out against strong competition from heavyweights such as Kingspan and Mitsubishi to scoop a major technology award in the UK.

The company took home the top prize for Renewable Energy Technology of the Year at the annual Energy Awards in London for the installation of its hybrid wind and solar-powered independent smart pole (ISP) at Wayside Celtic, a South Dublin football club.

The ISP is a solution that uses wind and solar power to charge itself off the grid. The pole, which also records data about air pollutants, can be used to power street lights, security cameras and electric fences, among other things.

Airsynergy earlier this year began installing its poles in locations across New York and Chicago as it looks to expand its presence globally.

The company recently completed deals with Lidl, Intel and Microsoft, and has expanded in to new markets in Europe and Canada with a further expansion planned for early 2018 involving UAE and Australia.

The ISPhas been installed in a wide variety of locations including schools, universities, retail parks, car parks, and construction sites, across Ireland and Germany.

A previous finalist in The Irish Times Innovation Awards and winner of an Engineers Ireland Technology of the Year Award, the company was established by Jim Smyth and Adrian Kelly in 2008.