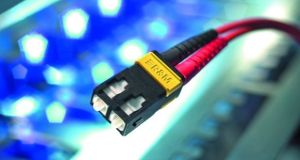 Broadband companies will soon be restricted from advertising their services with headline speeds that only a few customers are actually getting.

Currently operators here are allowed to advertise their products using “up to” speeds that only a fraction of end users receive. This has led to a spike in complaints about misleading speed adverts.

Under new rules from the Advertising Standards Authority for Ireland (ASAI), companies will now have to include the percentage of customers that the advertised speeds are delivered to.

“Maximum speeds, even when advertised at ‘up to’ speeds do not in all cases clearly alert consumers to the fact that speeds can and do vary,” the advertising watchdog said.

The new measures , which cover the advertising of mobile phone and broadband services, come into force next month.

They also move to clampdown on so-called “fake fibre” adverts, ruling that when the service is not provided on a full-fibre network, adverts must contain a “prominent qualification” that the network is “part fibre”.

This also follows complaints from consumer groups that broadband users are being duped into believing they are buying fibre-to-the-home (FTTH) products despite the technology only being available to less than 5 per cent of the State’s two million homes.

“Where the provider offers limited geographical coverage, advertising in national media must include a prominent and transparent reference to this fact,” the ASAI said.

The agency is also examining the use of the word “unlimited” where there are cut-off points and consumers end up paying “fair usage charges”.

“Marketing terms, by their design, are there to attract consumers to buy certain products and are an essential part of business development in the telecoms industry,” ASAI chief executive Orla Twomey said.

“However, there is the potential to mislead when marketing terms are used incorrectly,” she said.

Telecoms company Siro, which is building a new fibre broadband network across the ESB’s infrastructure, welcomed the new standards, saying: “At present some broadband suppliers use the phrase ‘fibre’ to describe networks that have part copper connections which severely affects performance.”

The company said its own market research indicated that most consumers were confused about “fibre” broadband.

The new guidelines evolved out of a consultation process hosted by the State’s Mobile Phone and Broadband Taskforce, which is chaired Minister for State for Community Development, Natural Resource and Digital Development Sean Canny.

“One of the aims of the Mobile Phone and Broadband Taskforce is to improve consumers’ knowledge of the different types of telecommunications services on offer,” he said.