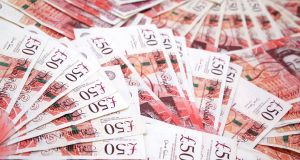 Software as a service (SaaS) performed well for the group, contributing £13.3 million to its overall sales orders of £130.7 million. Photograph: iStock

Belfast-based technology firm Kainos said profit rose in the year to end of March 2018 as revenue increased for the eighth year in a row.

“We’re moving beyond being just a UK/Irish business towards being a global one, with 21 per cent of our revenues now coming from Europe and the US. That end of things has been growing and we expect this to continue,” said Mr Mooney.

Preliminary results for the group, which is listed in London, show revenue rose 16 per cent to £96.7 million (€111 million) over the last year due to growth in both digital and commercial revenues.

Kainos said performance was in line with market expectations. Pretax profit was 7 per cent higher on an adjusted basis at £15.3 million. The firm said it had spent £4.9 million on research and development during the year.

Software as a service (SaaS) performed well for the group, contributing £13.3 million to its overall sales orders of £130.7 million. The total figure was up 38 per cent, with SaaS orders increasing 32 per cent year on year.

There was continued growth in digital services throughout the year as new and existing customers drove demand. Commercial revenues were up to £29.1 million, with SaaS and software-related revenues at £15.9 million.

The group said its contract backlog rose by 45 per cent to £110.7 million, up from £76.4 million a year earlier. Customers outside the UK now account for 21 per cent of total group revenue.

Over the last year, the company opened new offices in Birmingham, as well as in Frankfurt and Copenhagen.

Kainos, which employs about 1,225 people overall – the majority of whom are in Belfast – also has offices in Amsterdam, Gdansk and Dublin.

Mr Mooney said given the scale of the programmes the company is working on for the UK government, it expects revenues from this area to continue to be buoyant.

“The scale of the UK government’s ambition for digital is huge and, as the programmes we are in are key, and have resulted in big savings, they aren’t going to walk away from these, no matter what happens with Brexit. That is why we’ve always been confident in our government business,” said Mr Mooney.

Describing the group as being “well positioned for growth both in the short term and in coming years”, Mr Mooney also said Kainos was benefitting from increased spend on IT generally.

“We’re seeing an increase in activity across the market. People have drawn the analogy with the year 2000 as a period for IT change, drawn in part from the UK preparing to start using non-EU systems,” he added.

1 Bank leaked my loan request to family who tried to rip me off
2 Solar panels: How do they work - and are they worth it?
3 Ryanair and Aer Lingus monitor impact of coronavirus on travel to Italy
4 Over $12m from sale of Walford handed over in Sean Dunne bankruptcy case
5 Mastercard to create 1,200 new jobs by expanding base in Dublin
Real news has value SUBSCRIBE