RebelBio, the world’s first life sciences accelerator, is to relocate to London 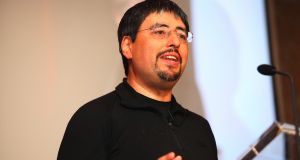 Bill Liao, founder of RebelBio and a partner at SOSV, said a decision had been taken to relocate the programme to London for good for its sixth cohort, which takes place shortly

RebelBio, a Cork-based life sciences start-up accelerator programme, is relocating to London on a permanent basis, blaming in part a lack of institutional backing and insufficient tax incentives for investors in Ireland.

Speaking to The Irish Times, Mr Liao said a decision had been taken to relocate the programme to London for good for its sixth cohort, which takes place shortly.

Outlining the reasons for the move, Mr Liao noted that over $1 billion (€860 million) was raised for life sciences companies in London last year and that the city continues to be a rapidly growing hub for start-ups operating in the space.

In addition, he cited a lack of tax incentives for investors in Ireland and a lack of support from partners beyond Enterprise Ireland.

The decision comes after SOSV last year cancelled a planned second annual instalment of RebelBio in Cork and shifted its demo day showcase for the latest programme to London. At that time it also withdrew plans to establish a European version of Food-X, another well-regarded accelerator programme in Ireland.

“We had more signed investors’ term sheets for companies in the first London cohort than we had in the last two Irish ones and you have to go where the money is to do the best you can for start-ups,” said Mr Liao.

“More support from Irish limited partners besides Enterprise Ireland would make a difference but hasn’t been forthcoming,” he added.

Founded in Cork in 2014 as the world’s first life sciences start-up accelerator, RebelBio focuses on helping early-stage companies unlock the potential of biology as a technology. It offers seed funding, laboratory space at University College Cork, and mentorship to budding entrepreneurs.

Close to 50 early-stage companies have participated in RebelBio to date with a number of them having gone on to raise significant funds. These include Perfect Day, which raised nearly $25 million (€21 million) earlier this year to bring its synthetic animal-free milk to market.

The company (formerly Muufri) made headlines around the world when it announced plans for its cow-free milk product while taking part in the inaugural accelerator in Cork.

Other companies to have graduated from RebelBio include Hyasynth Biologicals, a Canadian start-up that also made the news after it announced it had genetically engineered yeast to create a range of cannabinoids for therapeutic purposes. Just this week it confirmed a $10 million (€8.5 million) strategic investment from Organigram to help it work towards harnessing the therapeutic benefits of cannabis, without marijuana.

Mr Liao, who lives in Cork, stressed that SOSV’s connection to the city would continue despite the relocation of RebelBio to London.

“We are encouraging Irish biotech companies to go to our London programme and find investment speedily there. In addition we continue to operate our Ireland fund in partnership with Enterprise Ireland so we are investing here and are looking to extend that funds investment period,” he said.