Pricing for the new premium XS Max in Ireland starts at a not inconsiderable €1,279 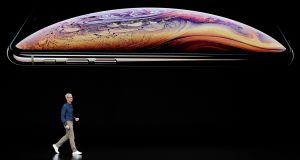 Apple has announced three new iPhones and a larger smartwatch at its now annual product event at the Steve Jobs Theater at its headquarters in California.

The technology giant, which became the first publicly traded US company to hit a market value of more than $1 trillion ($860 billion) earlier this year, revealed a number of new updates. However, with many of the details of these having previously leaked, there was little in the way of real surprises.

Moreover critics, who have complained about ever-increasing prices for smartphones, will have plenty to say about the new iPhones.

The new smartphones, based on last year’s iPhone X, include the XS and the aforementioned XS Max. The XS comes with a 5.8in screen, while the XS Max has a 6.5in screen, the largest-ever iPhone screen.

Also available is the lower-spec XR, which comes with a 6.1in liquid retina display, a single camera and what the company claims is the “most advanced LCD ever seen in a smartphone”.

The chip at the core of the new iPhones is the A12 Bionic, which is produced using a seven-nanometre process. Apple says it helps launch apps 30 per cent faster.

The XS has an all-new camera system, which includes wide angle and telephoto rear cameras with 12-megapixel sensors. The front has a new seven-megapixel sensor. The system can record stereo sound and it takes high-quality low-light footage as well.

Apple has sold more than a billion iPhones since the smartphone went on sale in 2007. The iPhone remains the company’s most-important product, generating about two-thirds of revenue .In its last quarterly figures Apple announced it had sold 41.3 million phones, slightly below expectations of 41.8 million.

Meanwhile, shares in Fitbit fell by more than 3 per cent after Apple unveiled its new Apple Watch Series 4, which it described as “an intelligent guardian for your health”.

The watch has a an edge-to-edge screen display that is at least 30 per cent larger than previous versions and is also thinner. It comes with a new dual core 64-bit process for a significantly faster performance, as well as a new speaker, microphone and improved haptic feedback.

A new innovation is a sensor that allows users to take an electrocardiogram (ECG), which they can send on to their doctor. It also recognises slips, trips and falls and can automatically call emergency services if a person is immobile for a prolonged period. The latest Apple Watch has an 18-hour battery life.

Apple said it had received FDA approval for these new features, which will only be available for use in the US initially.

The Apple Watch Series 4 will be available to order from Friday 14 with prices starting at $399 for the GPS version and $499 for a version with LTE connectivity. Series 3 prices are to be reduced to $279. It comes with watchOS 5, the latest version of Apple’s operating system for smartwatches.