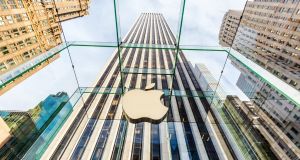 Apple will deposit between €13 billion and €15 billion in tranches in an escrow account being set up by the NTMA. Photograph: iStock

The tax Apple is due to pay to the State will be drip fed into the escrow account being set up by the National Treasury Management Agency (NTMA), according to tendering documents released this week.

Between €13 billion and €15 billion will be deposited into the escrow account in tranches, rather then in a lump sum on a single day, as part of the back taxes the State is required to collect from the technology giant.

The current NTMA tender seeks expressions of interest for the provision of custodian services in respect of the Apple funds.

The requirement to hold money in escrow is due to a pending appeal on last year’s European Commission ruling that Ireland granted Apple unfair deals that reduced the company’s effective corporate tax rate. The appeal process could take between four and six years.

In May, the commission complained that Ireland should speed up its efforts to recoup the unpaid taxes or it could end up in court. It has now been more than seven months since the state missed the original European Union deadline to collect the funds.

Earlier this week the Minister for Finance, Paschal Donohoe, said in an interview with Germany’s Frankfurter Allgemeine Zeitung newspaper that the commission’s demand that Dublin collect up to €13 billion in back taxes from Apple was unjustified.

In the interview Mr Donohoe said the tax rules from which Apple benefited had been available to all and were not tailored for the US technology giant. They did not violate European or Irish law, he added.

“We are not the global tax collector for everybody else,” the newspaper quoted him as saying.

At the end of Apple’s last financial year in September 2016, only $20.5 billion (€17.6bn) of the iPhone maker’s $237.6 billion (€203.7 billion) “cash” hoard was actually made up of cash or equivalents. The remainder was invested in US and other government bonds, corporate securities and asset-backed bonds, such as debt issued by mortgage providers.

The investment managers appointed to the escrow would be expected to adopt a similar investment style to Apple.

In briefing notes issued in July, the NTMA said: “It is expected that the arrangements (including signed contracts) will be in place and the initial funding paid over to the fund before the [escrow] fund before the end of the year.”

1 Should my mam wait for house prices to drop before buying?
2 Pilita Clark: Why we’re about to learn if we are really in the A-team
3 Hard-hit SMEs get ‘paltry’ €11m worth of loans under State scheme
4 ‘I have a talent for justifying purchases’
5 Irish whiskey sales near milestone of 12m cases a year
Real news has value SUBSCRIBE