More than 2,000 workers at seven Amazon sites across Germany have gone on strike over pay 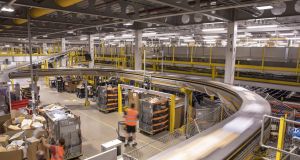 By extending its Prime Day sale by 12 hours, Amazon is expected to pull in nearly 50 per cent more in sales, according to an estimate from Coresight Research. Photographer: Bloomberg

More than 2,000 workers at seven Amazon sites across Germany have gone on strike over pay for at least two days, labour union Verdi said on Monday.

The walkouts, under the motto ‘No more discount on our incomes”, started overnight and coincide with Amazon’s Prime Day when the US online retail giant offers its ‘Prime’ customers discount deals. Germany is its second-biggest market after the United States.

Amazon has faced a long-running battle with unions in Germany over better pay and conditions for logistics workers, who have staged frequent strikes since 2013.

“While Amazon fuels bargain hunting on Prime Day with hefty discounts, employees are being deprived of a living wage,” Verdi retail specialist Orhan Akman said in a statement.

Amazon did not provide exact numbers for how many employees were striking but said participation was limited and had no impact on customer deliveries.

“The company must finally recognise the collective wage agreements for the retail and mail order sectors,” Akman said. “Wages and salaries at Amazon must no longer be determined in the style of a lord of the manor.”

“A universally binding collective agreement would then apply for Amazon too,” said Akman.

An Amazon spokesman said the company was a fair and responsible employer even without having a collective agreement in place, adding: “In our fulfilment centres, our wages are at the upper end of what is paid in comparable jobs.”

Amazon runs 12 warehouses - which it calls fulfilment centres - in Germany. Earlier on Sunday, Amazon said it plans to open a new warehouse in Germany this year and create more than 2,800 jobs with permanent contracts.

Monday is the start of Amazon’s annual Prime Day sale, when subscribers to the company’s Prime service get major discounts on everything from flat-screen TVs to Ben & Jerry’s ice cream. Now in its fifth year, this year’s Prime sale stretches across two days, and Amazon is not the only company involved. A record 250 retailers are offering their own sales to compete with Prime Day. - Reuters