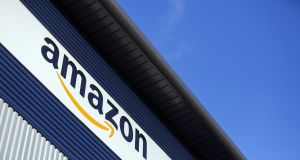 Profit before tax increased to €30.2 million from €26 million. The company paid just over €11 million in tax. Its balance sheet shows that net assets rose to €686 million on December 31st from €551 million 12 months earlier.

Amazon CS employed 1,041 people at its base in Cork Airport Business Park. Turnover there grew to €107 million from €98.2 million.

Directors Ian Semple and Therese Fitzpatrick state in their report that administrative expenses are the main measure of the business’s performance. These increase by 9 per cent to €110.8 million from €101.2 million.

The company’s accounts show that its main asset was €31.6 million due from its creditors, of which other Amazon group companies owed €30.7 million.

In a similar vein, Amazon Data Services’s biggest asset was €197 million owed by creditors at the end of last year.

Other group companies owed it €53 million while €64 million was due from its parent. The figures show that it was due €68 million in VAT returns.

Amazon recently clashed with US president, Donald Trump, who accused it of using the country’s postal service as its delivery boy and claimed that it should pay more sales tax.

The group has expanded from selling books and CDs on-line to trading in more than 500 products.

It is also a leading provider of cloud computing infrastructure, that is the servers and other equipment used to support other business’s technology needs.