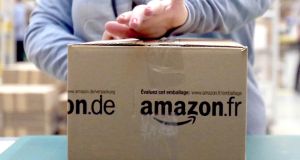 An Amazon package being prepared at at warehouse. Shares in the ecommerce giant have surged by 63 per cent so far this year. Photograph: Chris Radburn/PA Wire

Amazon. com shares have topped $3,000 for the first time, extending a rally that has left most Wall Street analysts in the dust.

Shares of the ecommerce giant climbed as much as 4 per cent to $3,004.88 on Monday, bringing gains so far this year to 63 per cent. The average price target on the stock was $2,810 and fewer than a quarter of the 50 or so analysts tracked by Bloomberg have a target above $3,000.

Earlier this month it was reported that Jeff Bezos’s net worth had smashed through its previous peak, even after he relinquished a quarter of his stake in Amazon.com as part of a divorce settlement last year.

Shares of the Seattle-based retailer had surged to a record $2,878.70 boosting the founder’s world-leading fortune to $171.6 billion. That topped his previous high of $167.7 billion, set on September 4th 2018, according to the Bloomberg Billionaires Index.

The company declined at the time to comment on its founder’s wealth.

Amazon has been on a tear, with the pandemic accelerating the consumer shift to e-commerce from bricks-and-mortar retail. Bezos owns 11 per cent of the stock, which comprises the bulk of his fortune. - Bloomberg

1 Bank of Ireland to cut 1,400 jobs as Covid-19 drives €937m loans charge
2 Sacrificing pubs for schools: Ireland’s latest Covid trade-off
3 Green power auction wins for 19 wind farms and 63 solar projects
4 Quintain to seek permission for 1,000 homes at Cherrywood
5 How safe is it to go back to the office?
Real news has value SUBSCRIBE