SXSW: Elon Musk and Mark Zuckerberg’s Facebook on the agenda 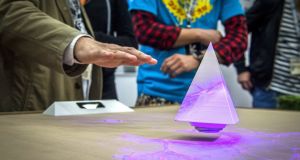 SXSW expects about 300,000 to attend the conference.

While no big name minister from Ireland will be attending this year’s SXSW Interactive 2019 conference and festival, more work is being done behind the scenes than ever before to ensure Irish start ups are taken seriously.

There will be at least a dozen Irish companies present on the floor of the Austin Convention Centre during SXSW Interactive 2019, the tech part of a fortnight of music, arts, film, media and innovation held in downtown Austin. Former RTÉ newsman and Storyful founder, Mark Little, is joining this year’s group to promote his latest news app, Kinzen.

Enterprise Ireland will also be hosting ‘Ireland Innovation Hour’ at the SXSW Convention to “showcase the world-class solutions that Irish companies have to offer in areas such as smart homes, customer/brand engagement and enterprise tech.”

Since opening an Ireland House in Austin four years ago, and establishing the presence of the IDA, Enterprise Ireland and a foreign consulate in the Lone Star State, two Taoisigh and three ministers have come to visit the festival. However, no big profile government representative is on the cards this year.

Ireland’s consul general in Austin, Adrian Farrell, is unperturbed.” We always have a strong presence at SXSW,” he told the Irish Times. “We’ve been such a long time partner and attendee at SXSW – in both tech and music, it demonstrates how seriously we take the festival and this is reflected in how much we are respected and taken seriously by the SXSW organizers.”

Autonomy remains the hottest topic at SXSW Interactive 2019 as questions surrounding driverless vehicles, artificial intelligence and robotics shift from the ‘what if’ to ‘what now.’ For the second year running, SXSW Interactive curators have deemed AI to be the zeitgeist centrefold of tech: a cursory glance through the five days of scheduled talks, panels and keynotes, sees more ‘As’ and ‘Is’ than U could shake a stick at.

Elsewhere one notices a self-reflective and even self-deprecating side to the scheduled events. At a keynote speech entitled: Elon Musk: “The Frightening and Awful Future of Humanity” comic Jason Adomian will take on the role of the south African engineer and entrepreneur in a satirical spoof on what the future holds.

Twelve months is an awful long time in the tech world. Last year Elon Musk was the surprise guest at the SXSW Interactive festival. His presence caused great excitement among the media who were told about it just 12 hours before he magically appeared at the Moody Theater in downtown Austin.

Musk’s fortunes vary about as much as his business portfolio – which includes SpaceX, the company driving human efforts to get to Mars, as well as the Boring Project, an underground transportation project seeking to drive us all into the ground. Given the year he’s had, Musk isn’t likely to surprise us again this year.

Another keynote address will focus on the fortunes of Mark Zuckerburg’s Facebook. “Zucked: How Facebook Has Upended the World We Live In” sees Roger McNamee, an early mentor to Zuckerberg and Nicholas Thompson, editor in chief of tech website, Wired, discussing the future of the social media site, just days after Zuckerberg himself set out to put a positive spin on how Facebook’s future would be one filled with privacy, and individual control over their own digital identity. One doubts the same optimism will be present during the talk at the city’s Convention Center this weekend.

Reminiscent of Dublin in the early 2000s, the Austin skyline is dominated by cranes and scaffolding as the economic and cultural boom enjoyed by the capital city of the Lone Star State continues unabated. Thousands of people continue to relocate here to fill its need for tech expertise or to bask in its wealth of musical talent.

Hours before the official festival kicks off, workers continue putting together temporary venues, conference rooms, and meeting halls, which to the untrained eye, would leave one thinking these guys don’t know what they’re doing.

But for all its naysayers, SXSW is an impressive example of effective people management. This well-oiled machine runs every year with surprisingly few problems despite average attendance growing to around 300,000 people over two weeks. But then again, it has been taking place since 1987, so it would want to be.

1 Who are Ireland’s 17 billionaires?
2 My father in a nursing home wants to gift me his house
3 Are there annual limits on inheritances or gifts to a child?
4 Ireland ranked second in Europe for data breach notifications
5 State-backed Finance Ireland weighs stock market flotation in 2020
Real news has value SUBSCRIBE