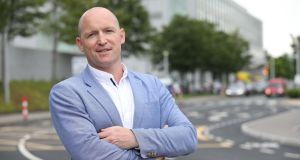 Dr Oran Rigby, founder and CEO of Akkure, developed a strong interest in the application of robotics and automation to medicine while working in Australia.

In March this year the digital health start-up Akkure Genomics launched CovidMedBot, a free online tool providing personalised risk assessment to help individuals and employers cope with the coronavirus pandemic. It was a minor pivot for the company, which was set up last September to disrupt the clinical trials market.

When Covid hit, Akkure founder Prof Oran Rigby felt it was important to contribute to the “war” effort. “We already had the infrastructure in place so it was relatively straightforward to build out the CovidMedBot while still continuing to develop our main platform,” he says.

Akkure’s rapid response to the immediate needs of the pandemic was down to a combination of Rigby’s clinical background and his expertise in data science. He has spent more than 25 years as an intensive-care consultant working primarily in the field of neurotrauma in Australia and during this time he developed a strong interest in the application of robotics and automation to medicine.

Before setting up Akkure, Rigby was involved with four other digital health start-ups including Crit e Care, which helps clinicians incorporate modern technology into traditional models of care, and Silicon Scalpel, which is a venture lab for hi-tech medical start-ups in areas such as AI, robotics and drones.

Akkure is an AI-inspired start-up that gives members of the general public a means of leveraging their personal medical data to access clinical trials relevant to their condition and to benefit from any cures or therapies that may emerge.

As things stand, Rigby says third parties are making a great deal of money from using people’s data without their permission. He wants that to change. Those signing up with Akkure – for free – remain in control of their data and, when their personal medical profile has been plotted, they can use it to make treatment decisions about their own health and/or share it anonymously with the research community in the interests of helping in the development of new treatments.

“We have created a digital infrastructure that empowers patients to share their data and that matches patients with direct opportunities [usually clinical trials] to have their data used. This is unlike other intermediaries [such as ancestry tracing companies] that sell people’s data on to others,” Rigby says.

“We use natural language processing and AI to do the matching at speed and scale. Each person registering with Akkure owns their own genomic data and our next generation sequencing goes beyond standard genotyping to give them insights into their health that will allow them to make informed decisions about lifestyle and disease prevention. Individual and isolated medical data has minimal to no value. Its value lies in sharing and contributing individual data from a cohort of similar conditions to get more meaningful insights and information. This is the underlying concept behind Akkure.”

The drive to set up Akkure was deeply personal as it was prompted by Rigby’s desire to help a family member with a serious illness. “You want to find the best possible treatment for your patient and at any one time there are up to 280,000 clinical trials ongoing around the world that might be helpful in some way. However, it’s impossible for any single doctor to go through them all to ascertain what treatments, therapeutics or trials might help any one patient,” he says. “The family illness set me thinking about how I could use my deep domain expertise in both AI and health to address this and to solve a problem for society at large. Our mission at Akkure is to cure at scale, and central to this is a patient-centric platform where people can willingly share their medical information in the interests of furthering research and be compensated for so doing.”

Prof Rigby is a UCD medical graduate and fellow of the Royal College of Surgeons in Ireland (RCSI). He spent 15 years with the helicopter rescue service in Sydney while also leading the trauma response system for 200 hospitals in the region. He first became involved in automation and data science while working as a consultant in the ICU at the Royal Prince Alfred Hospital and this led to an honorary appointment to the faculty of robotics at the Queensland University of Technology. In 2015, he was awarded the Churchill scholarship to explore telemedicine in remote civilian and military environments.

Rigby returned to Ireland two years ago and set up Akkure Genomics in September 2019. The company is based at Nova, UCD’s hub for entrepreneurs, and it employs seven people directly and eight engineering contractors. Its target is the €60 billion global clinical trials market. Investment to date is heading for €2 million and this has come from a combination of digital health and tech angel investors, HPSU support from Enterprise Ireland and funding from the Government’s Disruptive Technologies Innovation Fund, which saw Akkure partner with the RCSI and Microsoft. The company’s platform will have its commercial launch within the next six months.

The incentive for individuals to sign up to Akkure is access to potentially life-saving treatments as well as financial and other compensations. The reason pharma companies – who will foot the bill for using Akkure’s database – will find the platform of interest is because it promises much better clinical trial outcomes as it gives them access to specific cohorts of patients whose clinical and genomic profiles match their needs.

“Pharma companies lose hundreds of millions of euro every year from delays in finding enough relevant patients to recruit and failure to retain patients on trials ends up with over 40 per cent of trials being terminated. That’s a strong incentive,” Rigby says.

Rigby says the clinical trials process is ripe for reform not least because precision medicine of the future is going to be eye-wateringly expensive with bills potentially running into millions per patient. He points out that, in some countries, people are already taking out so-called 20-year “drug mortgages” to pay for their treatments.

Rigby wants to shift the balance of power to the point where, for access to optimum trial candidates, pharma companies will be willing to share the revenues from ensuing successful treatments. In practice this would mean that trial participants would be rewarded with part ownership of emerging treatments via clinical trial equity rights. An added plus is that this approach would substantially reduce the cost of new drugs and treatments to health services worldwide.

“We are creating an entirely new ecosystem to deliver the next generation of hybrid digital trials fused with precision medicine,” Rigby says. “This pooled, connected and filtered data is a tremendously valuable resource for healthcare and patient communities.”