Silicon 50 event celebrates most influential Irish people in the valley

Praise for Irish wit, optimism and tax breaks but education remains a worry 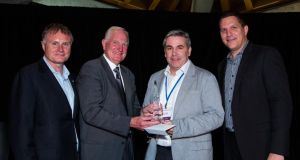 Long before there was an Intel or an Apple, Ireland was building links to Silicon Valley. Sunnyvale – now best known as the home of Yahoo and Palm – was founded, in 1844, by an Irishman. Ten years later, two Irishmen borrowed the name of their Galway village, Menlough, and gave it to the town that would become famous as the home of Facebook, Menlo Park.

Yet while the Irish on the east coast have long been harnessing their collective might to wield an influence in politics and business, it is only in the past decade that moves have really been made to rally the diaspora in Silicon Valley.

The organisation spearheading the drive to build stronger links between Ireland and Silicon Valley is the Irish Technology Leadership Group (ITLG), which was established by Limerick man John Hartnett and now has more than 10,000 Irish and Irish-American members. Hartnett has been living in Silicon Valley for 16 years, where he worked at Apple and Palm, before leaving to found the ITLG and the spin-off venture-capital firm, SVG.

“When you look at countries like China, Israel and India,” he says, “they do a great job at leveraging their diaspora with organisations and networks that are business-centric and tech-centric. I felt in many respects Ireland was living on its history – I felt there was something much more important we could be doing, a better story to tell.”

And so the Silicon Valley 50 was born, an annual power list of the most influential Irish people in the valley.

This year’s list – celebrated at an event in Stanford on Wednesday evening – is its seventh and evidence of the number of Irish and Irish-Americans who have, often without much fanfare, been navigating their way to the top ranks of some of the biggest companies in the world.

The list includes several founders and chief executives, a number of vice presidents, and the names of most of the most recognisable technology and media companies in the world – Google, Intel, Amazon, Facebook, Microsoft, Disney, Logitech, Belkin. It also includes 16 female finalists.

Jacinta Tobin, from Co Clare, is senior vice-president for global sales and business development at cyber-security company Norse. Being Irish is an advantage when doing business in Silicon Valley, she says, not necessarily because of Irish-American nostalgia, but because of the Irish sense of “irreverence and the ability to talk and have fun together. The first place I learned about business was in my parent’s pub in Clare. If there’s one thing I can do to help my own company, it is to make it a little bit more Irish.”

However, Rory O’Driscoll of Scale Venture Partners, who is also from Clare, says it’s important not to overstate the power of the “Irish effect”.

“Being Irish might get you in the door for a meeting, but it won’t get you a deal unless everything else is right. Most of Ireland’s appeal is that it’s a great place to locate companies.

“Let’s be honest, the tax infrastructure is advantageous and the workforce is educated. We need to protect that core infrastructure and that critical mass of European headquarters located there, and the next step – the creation of indigenous tech companies – will happen organically.”

Ireland may not have the scale of countries like China and India, but it can compete by specialising, says Craig Barrett, former chief executive of Intel and current chairman of ITLG. “Size isn’t so important – if you pick a few areas to focus on and get really good in those areas, you can compete with anyone. That’s what the Israelis have done with their entrepreneurial system. Build on your strengths. You’ve got a good education system, and good links to the expat community here.”

Education continues to be a talking point in the wake of the recent Times Higher Education tables, in which Trinity College fell to 138th place and UCD fell outside the top 200.

“There are no silver bullets for the education system, other than hard work. You have to work hard to attract good teachers and foster high expectations,” says Barrett.

Hartnett, who earlier this year launched an initiative through ITLG aimed at fostering entrepreneurship among secondary school students in Ireland, agrees. “If you look forward the dark cloud that’s there is education. Education is really the cornerstone of the creation of an innovative tech ecosystem.”

Overall, the feeling in the Stanford Faculty Club is that Ireland has a strong tailwind behind it, and that being Irish continues to open doors in Silicon Valley. Rory Dooley of Ultimate Ears, a brand of Logitech, says Ireland has “come out of the economic crisis and earned a lot of credit for that, and it is still a great place to do business from the point of view of the people here. Ireland just needs to make sure it doesn’t get too introverted or navel gazing, and keep looking out.” The Silicon Valley 50 include:

6 How affordable is housing for first-time buyers?

8 Opposition to Chawke’s apartments, BBC in mourning, and housing affordability