Seán FitzPatrick case one of State’s most cack-handed trials 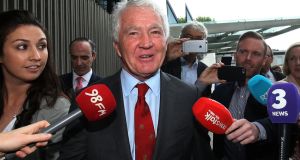 Seán FitzPatrick with his daughter Sarah talking to the media while leaving the courts today. He was acquitted yesterday on all charges after a ruling from a judge on day 126 of the trial. Photograph: Sam Boal/RollingNews.ie 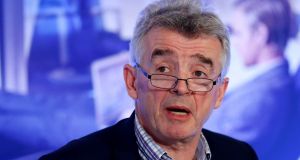 “This was an exceptionally high-profile case. It has essentially come to nothing.”

Those were the sage words of Fine Gael leadership contender Simon Coveney as he, and the rest of the country, digested the news that the judge in the trial of the former chairman of Anglo Irish Bank Seán FitzPatrick was to direct his acquittal.

The case was the longest-running criminal trial in the history of the State, and it may go down as one of the most cack-handed to boot. The development came as Judge John Aylmer strongly criticised the conduct of the Office of the Director of Corporate Enforcement (ODCE).

FitzPatrick had pleaded not guilty to 27 offences under the 1990 Companies Act. These included 22 charges of making a misleading, false or deceptive statement to auditors and five charges of furnishing false information in the years 2002 to 2007.

It was the prosecution’s case that multimillion euro loans he took out were “artificially reduced” for a period of two weeks around the bank’s financial end-of-year statement by short-term loans from other sources, including Irish Nationwide Building Society (INBS).

The prosecution alleged FitzPatrick failed to disclose the extent of these loans to the bank’s auditors in the years 2002 to 2007.

At the heart of the issue was the failure of the ODCE to carry out its investigation in a fair and impartial manner. Kevin O’Connell, a legal adviser with the office, shredded documents during a “panic attack” in his office in May 2015.

It wasn’t the only issue at play, with the judge remarking that the investigation fell well short of the duty to seek out evidence as to a person’s innocence as well as their guilt, and so that was that.

State missed opportunity to act prior to housing crisis

In case anyone needed reminding that we’re still living with the legacy of the banking collapse, 12 homeless families, including more than 30 children, were told to go to Garda stations on Tuesday night because no other accommodation was available.

It seems the various arms of the State are still very much struggling to come to terms with how the housing crisis might be solved. Economist John FitzGerald pointed the finger at local authorities for holding back the development of housing through their failure to deal with regulatory constraints and restrictions on height.

“It was clear from 2012, when the recovery turned the corner, we were going to need 25,000 dwellings a year over the following 20 years, but people didn’t believe Ireland had a future and nothing was done,” he said.

“We missed the opportunity of taking action three years earlier, which might have put us in a better position today.”

One development in Dublin involved the Marlet property group, formerly New Generation Homes, which wants to add 76 apartments to a site where it already has permission for more than 280 homes.

Dublin City Council recently gave the company permission to build a total of 283 apartments in a series of blocks at Carriglea, Muirfield, near Bluebell in the capital’s southwestern suburbs.

It applied for permission to add an extra storey to a number of the blocks that it is proposing. It is understood the company decided on the move after the council eased height restrictions in a strategic development plan for the area.

Meanwhile, a new study by the Central Bank showed first-time buyers borrowed an average of 78.8 per cent of the value of their property and 2.9 times their income in 2016.

A new overview of residential lending in Ireland shows 29,893 new mortgage loans with a total value of €5.7 billion were issued last year. Second and subsequent buyers borrowed an average of 66.4 per cent of the property value and 2.4 times income.

With house prices continuing to rise, the European Central Bank warned there may be “excessive exuberance” in some European housing markets, driven in part by foreign buyers, that could spread to other areas in a “ripple effect”.

The central bank said it was monitoring property-market developments closely and may top up national measures if necessary, for fear the situation could “threaten the stability” of financial institutions with mortgage exposures.

Big changes are afoot at Ryanair, with the low-cost airline threatening to stop selling flights to and from the UK, while also taking its first steps in the long-haul market.

Chief executive Michael O’Leary told reporters in Dublin this week that the airline is preparing for a “worst case scenario” where the UK is no longer part of the EU’s Open Skies air transport treaty after Britain leaves Europe in March 2019.

O’Leary warned that there may be no flights between the UK and the EU, including the Republic, for a period if Brussels and Westminster have not reached an alternative agreement by the time Britain leaves the bloc.

Separately, the airline entered a new partnership with Spanish-based airline Air Europa which will allow its customers to book trans-Atlantic flights on ryanair.com.

Customers can browse and book Air Europa flights on 20 long-haul routes from Madrid to 16 countries in North, Central and South America, including Argentina, Brazil, Cuba, Mexico and the United States.

In other aviation news, O’Leary is unlikely to be amused as Dublin Airport chief executive Kevin Toland said the facility could could seek more cash from airlines to help pay for further improvements.

The airport’s operator, State company DAA, has added new aircraft stands and boarding areas since last year, and this week opened an extension to pier one, the departure area used mostly be Ryanair.

There was another twist in the long-running Setanta Insurance saga, as the Supreme Court ruled the State’s Insurance Compensation Fund should be liable for compensation arising from the controversy.

The court reversed a previous High Court ruling that the Motor Insurers’ Bureau of Ireland (MIBI) should pick up the bill for funding claims connected with Malta-registered Setanta Insurance, which collapsed in 2014.

That means motor insurance premiums could rise in the next few years as the industry looks to put together a €150 million fund to meet some of the costs of compensation claims that arise from the failure of another insurer.

Existing legislation means the ICF is only liable for 65 per cent of individual claims or €825,000, whichever is the lesser. The MIBI, which was originally set up to meet the cost of claims involving uninsured drivers, would have been on the line for the lot.

Finally, the European Commission warned that the State better not start getting carried away with itself as the economy recovers.

It said the Government must make a “substantial fiscal effort” in the upcoming budget to stay within the provisions of the EU’s fiscal rules after last-minute changes to Budget 2017 meant we are now at risk of deviating from EU targets in 2018.

As a result, it recommended limiting the scope of tax cuts and spending increases in the forthcoming budget while adopting additional measures to broaden the tax base.