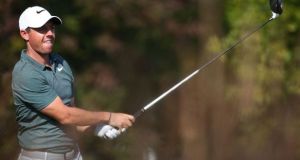 The Rory McIlroy Foundation Limited, which is a company registered in London, dispensed a total of £1.15 million (€1.28 million) to charities based in Ireland and the UK during 2016.

The money was raised through donations and fundraising activities, £862,543 (€965,170) of which was given to the foundation directly by the Northern Irishman.

This included the prize money he collected for winning the Irish Open at the K Club in Co Kildare in May 2016, as well as money raised through a number of fundraising initiatives during the same week, including An Evening With Rory McIlroy and Sir Alex Ferguson.

The proceeds of his Irish Open victory were split between three children’s charities: Barretstown, the Jack and Jill Foundation, and Laura Lynn Children’s Hospice; each of which received a total of €317,000 towards specific projects.

“Helping kids live better lives is at the core of every project we work with and every programme of change we are part of,” states the trustees’ report for 2016.

“Our goal is to release funds that seek to advance opportunity and lasting change for children who are suffering from ill health or who are unfairly disadvantaged or vulnerable.”

The UK company employed one person last year, a chief executive, whose salary of £74,028 (€82,834) was part-financed by the US-based charity.

The golfer’s personal donation of £862,543 (€ 965,170) represents a 24 per cent increase compared to the same figure for 2015. Funds dispensed to charitable organisations also increased by almost 51 per cent last year.

The trustees’ report for 2016 outlines the foundation’s plans to continue supporting charities under three “pillars of change”: health, community and research. The foundation will also continue to host the Irish Open next year.

“The Irish Open has become our Platform for Positive Change and the 2017 event showcased the impact our strategy can have reaching into local communities,” it stated.

“We continue to extend our reach throughout Ireland and 2017 saw three charities in southern Ireland directly benefit from our activity. As we continue to identify those causes aligned to our strategic vision, we intend extending our reach and aligning ourselves with those best placed to deliver meaningful change.”