Norwegian Air begins cutting its fleet ahead of restructuring 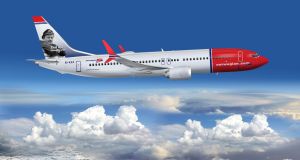 Norwegian Air Shuttle has been shifting planes from Scandinavian bases to Shannon Airport in recent in weeks in preparation for returning them to the aircraft lessors that supply most of its 140-strong fleet. Photograph: Norwegian Air/PA Wire

Norwegian Air Shuttle (NAS) has been moving aircraft to Shannon Airport as the troubled carrier begins cutting its fleet ahead of restructuring.

NAS and five Irish subsidiaries have High Court protection from creditors while examiner Kieran Wallace of KPMG works on a rescue plan for the airline, whose debts top €4 billion.

The airline has been shifting planes from Scandinavian bases to Shannon Airport in recent in weeks in preparation for returning them to the aircraft lessors that supply most of its 140-strong fleet.

The aircraft are mainly Boeing 787s, used for long-haul journeys. Two recently underwent maintenance and were repainted before being sent to Italian airline Neos, which has agreed to lease them.

NAS flew one 787-9 to Shannon from Copenhagen in December, en route to returning it to an unnamed lessor. Others have come from Stavanger Airport in southwestern Norway, the carrier’s home jurisdiction.

Aircraft lessors regularly use Shannon as a base for maintaining aircraft and to prepare them for transfer from one airline customer to another.

Other NAS craft are believed to have been parked at Ciudad Real Airport in Spain.

Many European airlines have chosen to mothball planes grounded by Covid-19 restrictions in Spain as its mostly dry climate makes it ideal for parking aircraft.

It is understood that NAS has moved just a small number of long-haul craft to Shannon. Not all are necessarily involved in the airline’s examinership.

The Irish-registered companies going through this process hold 72 of Norwegian’s total fleet, the remaining 68 are held by entities not included in the examinership.

NAS is due to produce a business plan this month that will involve cutting its fleet. It is not known at this point just how many aircraft the carrier intends keeping.

That plan is likely to form part of any rescue proposals put forward by Mr Wallace. The case is due back before the Irish High Court on January 22nd.

NAS chose to use the Irish courts to oversee its restructuring as its 140 craft are leased through subsidiaries registered in this jurisdiction.

Many of their creditors, including Irish leasing giant Aercap and Bank of China, also have a presence in the Republic, which is a recognised centre for aircraft financing.

Aircraft lessors have security over the planes they supply to airlines, ultimately giving them the right to repossess them should the customers fail to pay the rent due.

However, many of these companies have agreed to defer some of the rent due from airlines during the Covid crisis in the hope that their businesses can ultimately recover.