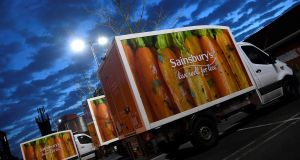 Signage for Sainsbury’s is seen on delivery vans at a branch of the supermarket in London. Photograph: Toby Melville/Reuters

Core sales at British supermarket group Sainsbury’s slipped in its key Christmas quarter as a drop in demand for toys and gaming products eclipsed a solid performance in food.

The group, which is trying to rebuild investor confidence following a botched attempt to buy rival Asda, also cautioned on Wednesday that British shoppers are likely to hold back on spending until there is greater clarity on the government’s March 11th budget and on Brexit.

Sainsbury’s like-for-like sales, excluding fuel, fell 0.7 per cent in the 15 weeks to January 4th, its fiscal third quarter, worse than a second quarter fall of 0.2 per cent.

While grocery sales grew 0.4 per cent, slightly ahead of analysts’ expectations, sales of general merchandise fell 3.9 per cent, with toys and gaming recording big declines. Sainsbury’s is a major player in both markets through its Argos chain.

Finance chief Kevin O’Byrne said the overall UK toy market was down about 10 per cent, while the gaming market was down over 35 per cent due to a lack of new consoles this year. – Reuters