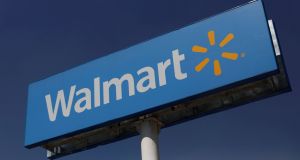 Walmart has coped better than other retailers with competitive pressure from Amazon, in part because of the scale of its domestic grocery business.

The world’s biggest retailer Walmart has reported a slowdown in sales growth, cautioning volumes in the US had been unexpectedly weak in the run-up to Christmas.

Like-for-like sales at Walmart US rose 1.9 per cent year-on-year in the three months to the end of January, slower than the 4.2 per cent jump recorded a year ago and the 3.2 per cent increase in the previous quarter.

The earnings from the country’s biggest retailer were the latest disappointing holiday figures from the sector, which has in recent weeks reported weak sales on categories from clothing to electronics. Target, Walmart’s big box rival, last month slashed its quarterly sales outlook after festive sales were weaker than expected.

Analysts had anticipated a slowdown at Walmart, pointing to factors including a warmer winter and an especially strong comparable period last year, when its toy sales were boosted by the closure of Toys R Us.

Yet the figures from Walmart, long considered a bellwether for financial trends among low and middle income households, will be scrutinised for signs of weakness in US consumer spending, whose resilience has helped underpin the global economy.

Brett Biggs, chief financial officer, said in a statement that, while the quarter “started and ended strong”, the company “experienced some softness” in some categories in the US in the weeks leading up to Christmas.

He said the holiday season “wasn’t as good as expected” and cited “pressure related to associate scheduling” as well as lower sales volumes.

Walmart has coped better than other retailers with competitive pressure from Amazon, in part because of the scale of its domestic grocery business. Investment in ecommerce however again put pressure on gross margins. Net sales across the group rose 2.1 per cent to $140.6 billion (€129.7 billion) while pre-tax profits ticked up 0.2 per cent to $5.6 billion.

The update comes at a time of change in Walmart’s executive ranks. Departures in recent months have included Greg Foran, head of Walmart’s US business, Steve Bratspies, chief merchandising officer, and Andy Dunn, an ecommerce executive.

“We understand the factors that affected our results and are developing plans to address them,” Mr Briggs added. “We remain confident in our business strategy and our ability to deliver value and convenience for our customers.”

Walmart predicted a pick-up over the coming financial year. The retailer said it expected like-for-like sales to rise 2.5 per cent at Walmart US, excluding fuel, and earnings per share across the group, adjusted for exceptional items, to increase between 1.5 per cent and 4.5 per cent.