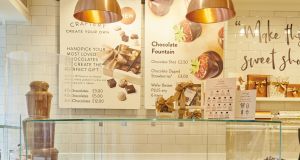 The company said the craftery will include a personalisation station where messages are hand iced on products.

British confectioner Thorntons is to open a new store in Belfast’s retail district next month.

The store, which will open its doors on March 5th, will include a wide range of Thorntons confectionery, as well as “a craftery”.

The company said the craftery will include a personalisation station – where customers can have messages hand iced on a range of products – as well as a “chocolate block flavour library”. Located on Arthur Square, the store will also include a café.

Founded by Joseph Thornton in Sheffield and using the slogan “chocolate heaven since 1911”, the company floated on the stock market in 1987 at a time when it enjoyed widespread popularity.

Thorntons then grew its experience around confectionery craftsmanship with the introduction of Easter eggs in 1922, a toffee recipe in 1924 and the launch of Thorntons Continental in 1954.

Ferrero International, which makes Nutella and Tic Tacs as well as the foil-wrapped Ferrero Rocher chocolates, agreed a deal to buy the company for £112 million in 2015.

It said at the time it wanted to expand its business in the UK where it has operated since 1966. It is the third-largest player in the global sweet packaged foods market.

The deal was the first by family-owned Ferrero International since the death earlier that year of patriarch Michele Ferrero, who was Italy’s wealthiest man and largely shied away from acquisitions.

Thorntons retail director Sarah Ingram said the opening of the new Belfast store was “an exciting moment” for the company.

“It gives us the opportunity to pass the love on to local residents and showcase everything we have to offer from our famous range of chocolates to our ever-evolving experiences,” she said.

“We look forward to welcoming Belfast residents to the new store to experience the very best of Thorntons.”