Penneys to expand Dundrum presence as House of Fraser exits 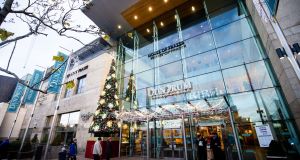 Pennys will join Brown Thomas in taking over space at the location in Dundrum Town Centre currently occupied by House of Fraser. Photograph: Tom Honan

Fashion retailer Penneys is in advanced discussions with the owners of Dundrum Town Centre in Dublin to take over two floors currently occupied by House of Fraser.

Sports Direct-controlled House of Fraser will vacate its premises in Dundrum in the coming three months, having failed to agree a deal with the centre’s owners, Hammerson and Allianz.

Penneys is on track to take the remaining space although a deal has yet to be agreed. It is understood that discussions between the retailer and Dundrum Town Centre are advanced.

The departure of House of Fraser comes after its near collapse last year before it was saved by Sports Direct. In response to The Irish Times reporting of the Brown Thomas deal to take two floors in Dundrum, a House of Fraser spokeswoman confirmed that the outlet will close “within the next three months”.

House of Fraser was previously reported to be paying annual rent of €2.4 million for the entire 12,999sq m (139,930sq ft) store, but figures contained in an administrator’s report in 2018, after the UK retailer ran into financial difficulties, reveal it had rental costs of some €103,000 a month at that time. This would have equated to €1.2 million per year.

Asked about the discussions, a Penneys spokeswoman said: “As Penneys operates under a public company we do not comment on speculation around store openings.”

The move will substantially increase the company’s floor space in Dundrum if it goes ahead. It is expected that Penneys will cease to operate in its current outlet located on the other side of the shopping centre.

It is unclear who might replace Penneys in its existing location. Hammerson, which manages the shopping centre, said it is in “discussions on the remaining” House of Fraser space but declined to say whether Penneys was the party with which it is in talks.

A House of Fraser spokeswoman said the company’s immediate priority is its employees in Dundrum. “We remain hopeful that many of them will now be employed by the new tenant,” she said.

However, such an outcome appears unlikely given the already significant presence, and therefore employee headcount, that both Brown Thomas and Penneys have in the shopping centre.

1 How can I view my dead brother’s will if I’m not the executor?
2 Provisional liquidator appointed to Dublin engineering firm
3 Travel costs for IDA chief topped €45,137 last year
4 Investors pile into Irish property as turnover in build-to-rent sector reaches €2.54bn
5 Facebook faces $9 billion tax trial in US over Irish offshore deal
6 Bursting of Tesla bubble a case of ‘not if, but when’
7 Mount Charles wins €10m catering contract at Maynooth University
8 Bank of Ireland staff in line for 2.95% pay increase
9 Germany drops opposition to fiscal boost in event of downturns
10 Glencore to shake up its top tier with younger leaders
Real news has value SUBSCRIBE