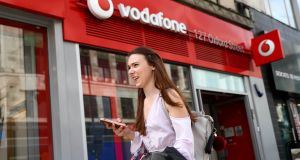 Vodafone’s organic service revenue grew more than expected in the third quarter after a solid performance in the UK and Germany offset tough competition in Italy and Spain.

Underlying revenue at Vodafone Ireland rose 3.3 per cent in the second quarter of the year , with service revenue hitting €241.2 million.

The company said it added more than 8,000 mobile customers during the quarter, with its contract customer base rising 4 per cent compared to the same period a year earlier.

Mobile data usage was also higher, rising more than 44 per cent to 21.2 petabytes.

“Vodafone Ireland delivered another strong quarter and is performing very much in line with expectations, with continued growth across a number of key areas - particularly mobile,” said Vodafone Ireland chief executive Anne O’Leary. “We remain focused on our strategic objectives of supporting the creation of a Gigabit Society in Ireland through the roll out of rural broadband via SIRO, which passed 200,000 premises during the period.”

Vodafone has also rolled out a number of Gigabit Hubs with Siro, adding an eighth hub with a 1 gigabit broadband connection during the quarter. A further four have been officially approved for connection.

“ The latest hub saw Irish Manufacturing Research (IMR), the Enterprise Ireland and IDA Ireland-backed technology centre in Mullingar, receive this vital connection,” said Ms O’Leary. “These types of initiatives are critical if we are to support the growth and long-term success of our indigenous companies and ensure that our local communities thrive.”

On a group basis, shares in Vodafone jumped after the mobile phone company’s new chief executive unveiled stronger than expected results in a fiercely competitive market and kept the dividend stable while he tries to rein in debt.

Vodafone, once a challenger to cumbersome former telecom monopolies, is now trying to fend off new low-cost mobile competitors while gearing up for a burst of spending to handle demand for faster networks.

Mr Read said the dividend would be unchanged this year but said the board would consider higher payouts once debt returns to the lower end of a target range. Analysts at New Street Research said Vodafone would still boast a dividend yield of 9.2 percent, which was “too high to ignore.”

“Given expectations had been low, all of this is clearly positive, but the underlying trends for Vodafone still remain challenging, especially in Spain, Italy and South Africa, ” New Street said in a research note.

Mr Read, previously the company’s chief financial officer who succeeded Vittorio Colao in October, is under pressure to chart a vision that can revive Vodafone’s flagging stock, which has been trading at its lowest since 2009.

He is contending with a potential activist investor challenge from Elliott Management. Elliott, whose agitating at competitor Telecom Italia led to the ousting of its chief executive on Tuesday, is said to have built a stake in Vodafone but is yet to comment publicly on its intentions.

Vodafone’s organic service revenue grew more than expected in the third quarter after a solid performance in the UK and Germany offset tough competition in Italy and Spain. The company raised a full-year cash flow forecast as it takes a knife to costs and said full-year earnings would be in the middle of a previous forecast range.

Mr Read laid out first priorities that included delivering more consistent results and getting more out of Vodafone’s infrastructure. He said he was forming a company to house its 58,000 telecom towers in Europe to cut operating costs and was considering the best strategic options for its tower assets.

“We’ll explore all options,” Read said on a call on Tuesday, saying the towers were the first step to improving the way Vodafone uses its assets to improve shareholder returns. - Additional reporting: Bloomberg

1 How can I view my dead brother’s will if I’m not the executor?
2 Michel Barnier rejects UK’s call for Canada-style trade deal
3 Barry’s Hotel at €8m comes with potential to double in size
4 How to . . . move (almost) everything to your new phone
5 Credit Suisse among banks reprimanded over handling of $660m Abacha accounts
6 Irish company paid €1.2m a year by collapsed Blumenthal-linked Australian restaurant
7 The sadness you feel when your best friend at the office leaves
8 Aqua Dome in Tralee could close over insurance claims, directors warn
9 Goldman ‘vulture funds’ collect €465m from distressed Irish loans
10 Budget 2020: New emissions tax on new cars and used imports
Real news has value SUBSCRIBE