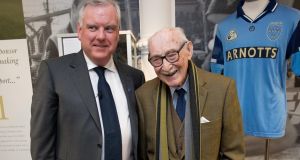 Dublin department store Arnotts, which celebrates its 175th birthday this month, on Tuesday evening launched an in-store collaboration with the Little Museum of Dublin, detailing the store’s history since 1843.

The store, owned by the Selfridges group, has set aside a section adjacent to its furniture department to display a range of exhibits covering its history. The display is curated by the historian Robert O’Byrne and the Little Museum, which was founded by former magazine publisher, Trevor White.

Also present were current and former members of staff, including 94-year-old Gerard Nolan who began work as a postboy at Arnotts in 1942.

Mr Nolan, who was later promoted to be the store’s retail superintendent, recalled that the year after he started, Arnotts celebrated its centenary for which he got an extra week’s wages. When asked what he thought of the revamped Arnotts store today, he replied: “Absolutely magnificent.”

Mr McDonald told the crowd that earlier this week, he had accompanied Mr Nolan into Arnotts via the staff entrance. Paul Caffrey, the former Dublin football manager during the period when Arnotts sponsored the team, also attended, as did RTÉ broadcaster Joe Duffy, who compered proceedings.

Artefacts at the in-store exhibition include the jersey worn by Charlie Redmond during the 1995 All-Ireland football final, won by Dublin, as well as historical fashion items sold by the store down through the years. There are also displays of the store’s significant historical events, such as its great fire of 1894, and the visit of the Beatles in 1963 who played in the Adelphi cinema, an area that is now the Arnotts carpark.

Mr McDonald told those assembled that the launch of the museum, which has been co-located with a pop-up tea room, kicks off a six-week period of events celebrating the 175th anniversary.

Arnotts is currently in the middle of a phase of significant investment by Selfridges, which also owns Brown Thomas on the other side of the river Liffey.

Selfridges recently set aside €11 million for an upgrade of the Arnotts store, as well as investment in its IT systems. The works will include a total overhaul of the beauty hall that fronts on to the main Henry Street entrance, as well as an upgrade of its restaurant facilities.